A lot has been written about Manly’s premiership credentials, or lack of them, since they were soundly defeated 40-12 by Melbourne in Week 1 of the finals series.

If you believe what you read, Manly are a one-man team. They’ve never beaten anybody that counts. Their back-rowers are too inexperienced. They don’t have the outside backs.

Many commentators would have you believe that the Sea Eagles are now just making up the numbers, and that only Melbourne or Souths can win the competition from here.

Well I reckon that’s just a load of bollocks.

Manly are still well and truly in it to win it. Sure, they had a horror start to the season after losing their first four games, and conceding 156 points in the process.

At that point they were deservedly not only written off as premiership contenders, but also firmed as favourites for the wooden spoon. The knives were well and truly out for coach Des Hasler.

That bad start would have been the end of most teams, but Hasler and the Manly players didn’t panic. They showed their true character.

Once their spine and structure were restored with the return of talisman Tom, they went on a winning run that included two decisive victories over the Parramatta Eels, with their only losses coming against Penrith, Canberra and the Storm.

When they won, they generally won big, and their back three of Tom Trbojevic, Jason Saab and Reuben Garrick totally dominated, crossing for an unheard-of 70 tries between them. They were back, big time, and finished the year in fourth place on the ladder.

Now, they’re just two games away from what will be their 20th grand final appearance, and I give them a better than even chance of not only getting there, but also of winning their ninth premiership if they make it that far.

Forget about last week. It wasn’t typical of Manly performances during the latter part of the season.

Manly appeared to get their tactics as wrong on the day as Melbourne got theirs right, and they couldn’t regain either their momentum or composure once Melbourne got away to an early lead on the back of a couple of Manly errors.

Melbourne always make it hard for teams to recover in those circumstances. 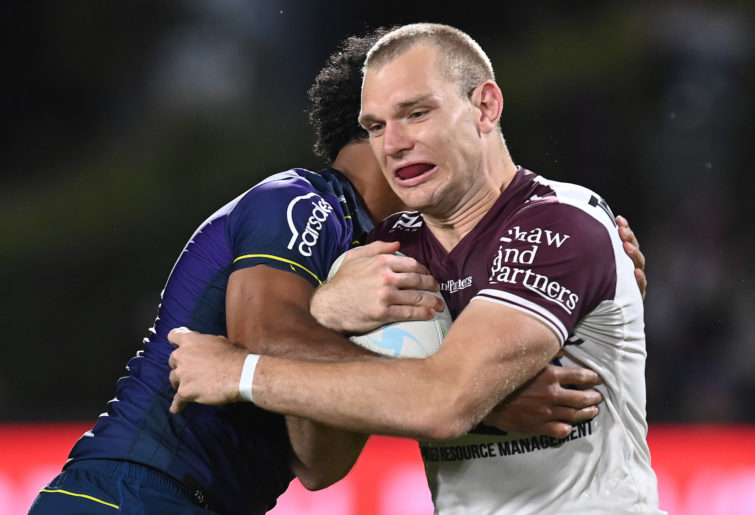 Manly weren’t the first top-six team to suffer a big loss this year though, and probably won’t be the last. Under the new six-again rules, momentum is everything, and a team can be blown off the park within the first 20 minutes if they don’t get their fair share of both possession and field position.

I expect Manly to bounce back this week against a depleted Roosters team, and then their next hurdle will be South Sydney. That’s two games that the Manly team can win.

Let’s face it, they’ve got one of the best spines in the competition outside of Melbourne, the form player of the competition in Tom Trbojevic, a great goal kicker in Reuben Garrick, try-scoring credentials in the back three, some big and brutal forwards in Martin Taupau, Josh Aloiai, Haumole Olakau’atu, Sean Keppie and Taniela Paseka, and the ball-playing skills of Jake Trbojevic and Josh Schuster.

They’ve also got an experienced, premiership-winning coach in Des Hasler, and he’ll know what it takes to get the team up for the next three games.

They’re a great chance to make the grand final, and once they get that far, anything is possible.