With a mix of new young players, some freshly capped Matildas, and a sprinkling of internationals, the action on the pitch is sure to excite.

Here is your quick guide to the A-League Women’s season:

Will Adelaide play finals is the question that follows this United side around like a bad smell. The Reds have never made a final series and have never come closer than last season where the team ultimately finished fifth.

Coach Adrian Stenta has brought in plenty of exciting new names to complement the likes of Chelsie Dawber, Emily Condon, and Matilda McNamara. It’s a squad that is full of potential and could round out the final spots at the top of the table.

Prediction: Adelaide could prove to be a surprise packet and finally make finals this year. The difference between fourth and fifth place could be how quickly their NPLW players adapt to the ALW level.

After experiencing the Matildas exodus in the final weeks of the season last year, Brisbane Roar and new coach Garrath McPherson have undertaken the unenviable task of replacing the likes of Clare Polkinghorne, Tameka Yallop, and Emily Gielnik. Throw in Kim Carroll’s departure and the Roar are suddenly without hundreds of games worth of ALW experience.
McPherson has leaned heavily on the local NPLW competition to fill his squad with players like Shea Connors, Meaghan McElligott, Cannon Clough and Rie Kitano all making the step up.

Prediction: Brisbane has to conjure up a whole new defence with the departures of Polkinghorne and Carroll and the season-ending injury to youngster Holly McQueen. It’s an area of the pitch which may prove to be a liability and keep the Roar away from the pointy end of the season.

Canberra’s season was very much tied up in the narrative of Michelle Heyman’s return to the league. She was a force for the team in green, going on to win the Julie Dolan medal. Without her, however, Canberra looked toothless up forward and her absence was a big reason why United exited at the semi-final stage.

For season 2021-22, Vicki Linton has welcomed back another Canberra legend in the form of Ash Sykes. Add in Aliira Toby and goals no longer appear to be a problem.

Prediction: Kendall Fletcher is a huge loss to this Canberra side and they will also be without recent Matildas debutant Jessika Nash who has moved to Sydney. This team might now be full of goals in an attacking sense, but it may also be full of them in a leaky one. The team has the potential to score their way to a finals spot. 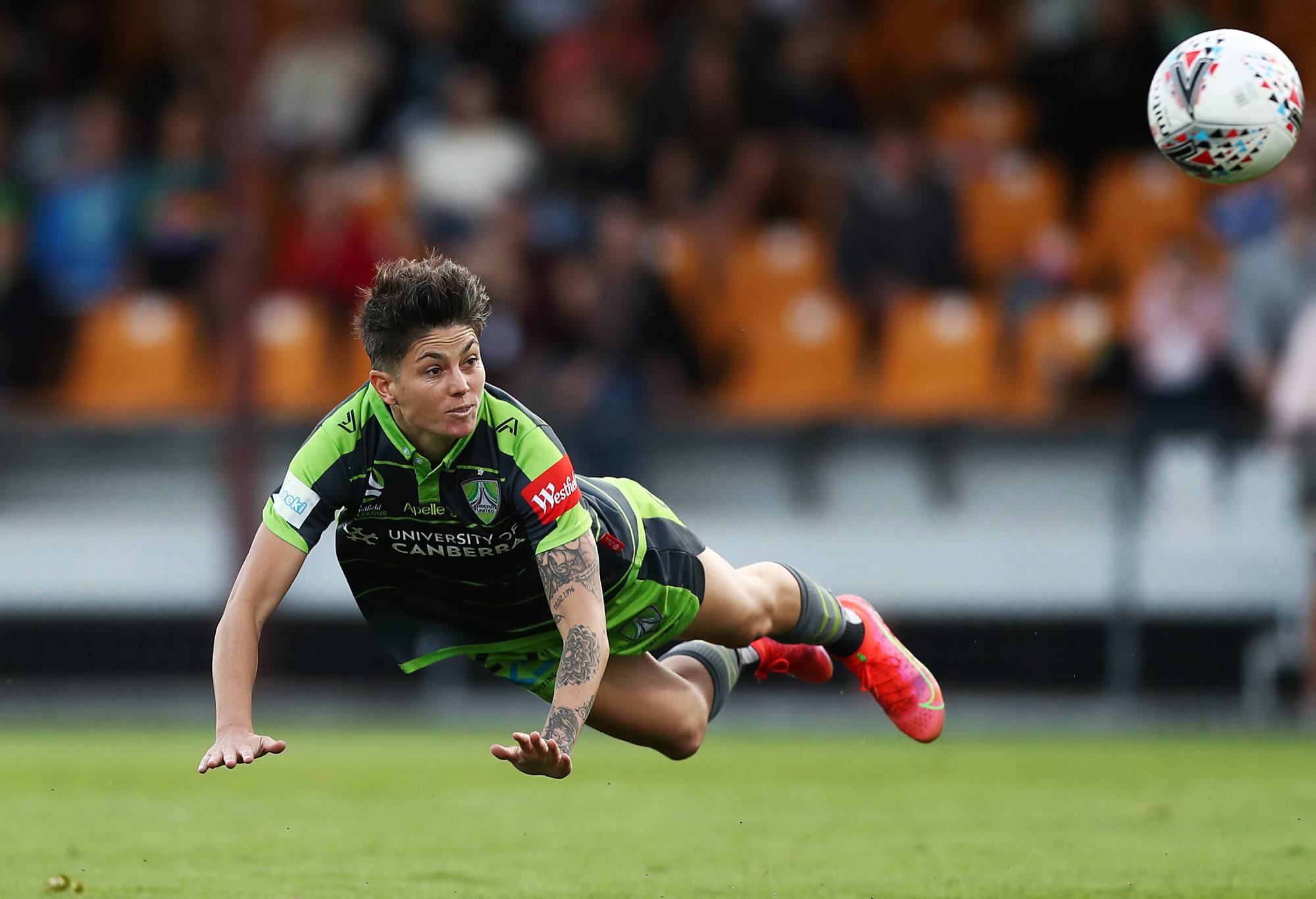 Melbourne City would have been disappointed with last season’s showing and the proof is in Rado Vidosic’s recruitment drive for this season’s iteration. City have an absolute stack of defenders with the likes of Chelsea Blissett returning from injury, Winonah Heatley and Kaityln Torpey making the move from Brisbane, and Emma Checker back again to lead.

There’s also the inclusion of Rebekah Stott who will take to the park for her first professional football match since being diagnosed and undergoing treatment for Hodgkin’s Lymphoma.

Prediction: While Canberra have some incredibly strong strikers in their midst and some questions over defence, City has the opposite problem. But much like Canberra, City has the potential to defend their way to finals.

After two consecutive semi-final defeats, Melbourne Victory finally made it to the grand final and it was one to remember. The reigning champions have stuck together for the most part under the guidance of Jeff Hopkins.

Casey Dumont returns in goal from injury while Courtney Nevin will serve as a perfect replacement for former captain Angie Beard. The team has undoubtedly lost some spark with Lisa De Vanna heading to Perth. However, they still enter this season wearing the favourites tag and with good reason.

Prediction: Victory’s championship was built off the back of a strong defence, particularly in the second half of the season. That solid backline will once again be crucial in Victory’s quest for another trophy; a quest they should complete. 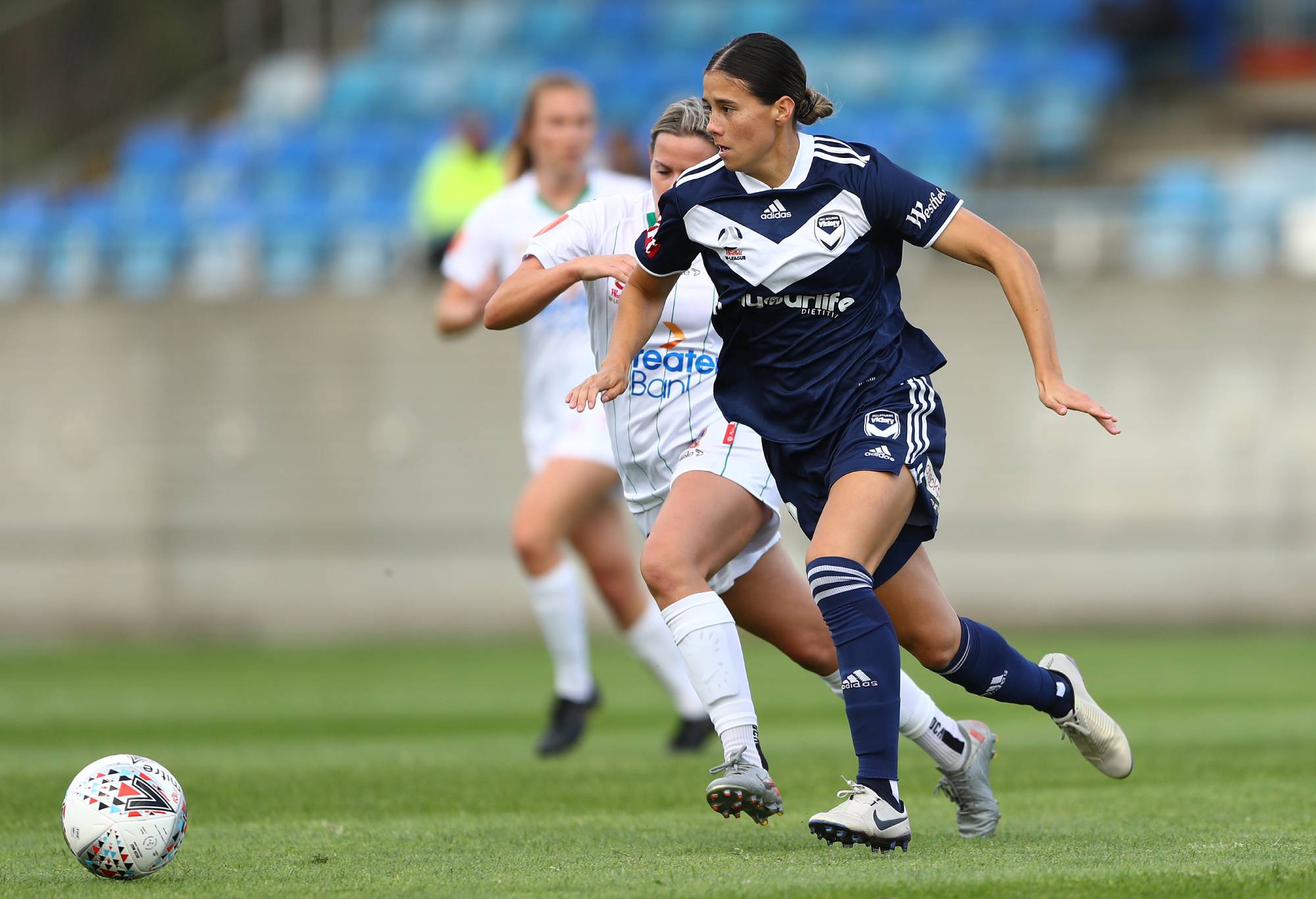 It’s another Newcastle-centric squad for the Jets who finished eighth last season. They were able to show some glimpses as to what they could be but were more routinely outmuscled by opponents.

Players like Hannah Brewer, Gema Simon, Cass Davis, and Tara Andrews all return for another year and have a proven track record in ALW. But this season, the Jets can count on some international experience – something they don’t have often.

American Elizabeth Eddy and Norwegian Marie Markussen will have big roles to play in Ash Wilson’s side.

Prediction: There should be improvement in this Newcastle Jets side. However, it won’t be enough to crack finals this time around.

Alex Epakis received a baptism of fire when he took charge of Perth Glory last year. Between his late entry, an inherited squad, and border troubles, nothing Epakis did went according to script. As such, the team finished dead last with no wins.

Unsurprisingly it was the Glory who made early moves this season, building a squad that had Epakis’ fingerprints all over it. His young team – which features several Young and Junior Matildas – is mostly inexperienced at the ALW level. But this season looms as the start of a long-term rise to the top.

Prediction: A young squad anchored by experience in the form of Lisa De Vanna, Tash Rigby, and Kim Carroll, Perth Glory will improve on last season’s showing. It is a feat which isn’t difficult considering the only way is up from rock bottom. Finals might be just out of reach this season though.

Sydney FC has made nine grand finals in 13 seasons of A-League Women and never finished outside the top four. It’s an incredible record they plan to continue in season 2021-22. Ante Juric has retained a large chunk of his premiership winning squad. To it he has added recently-capped Matilda, Jessika Nash, and forwards Maria Jose Rojas and Paige Satchell.

The front trio of Remy Siemsen, Cortnee Vine, and Princess Ibini promises to continue its fine scoring run. While down back, Sydney will unfortunately be without Ellie Brush who reinjured her ACL.

Prediction: Sydney’s finals streak is in no danger of ending based on the squad that’s been assembled. Their squad stability – as well as Victory’s – suggests some big blue battle for trophies will be the flavour of this season’s campaign too. 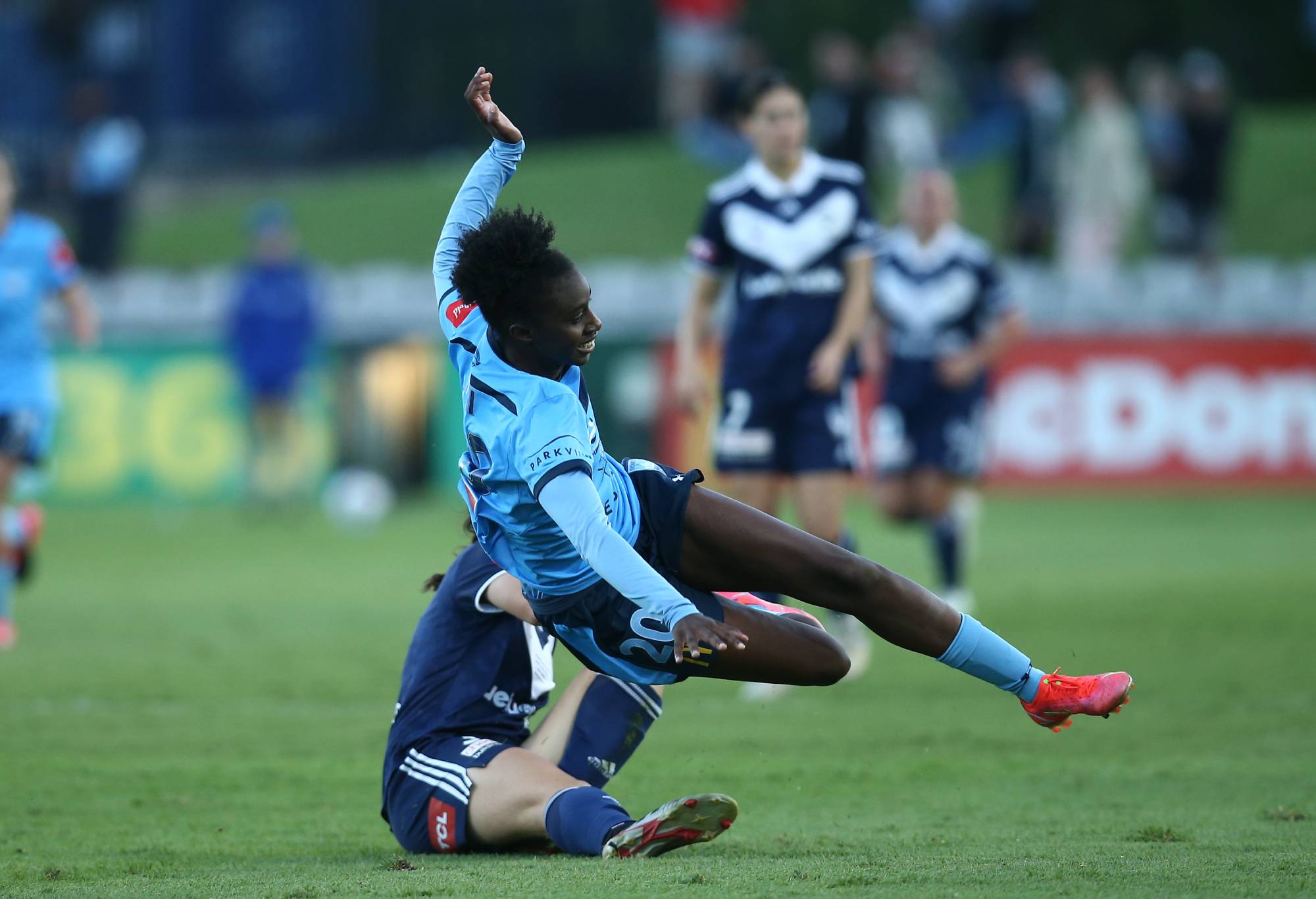 Wellington Phoenix become the A-League Women’s 10th team in a move that has exciting ramifications for both New Zealand and Australia. With constraints on the squad in terms of the number of Kiwi players coach Gemma Lewis is allowed to have, she has focused heavily on youth and specifically players from the Future Ferns program.
With an average squad age of 19, this Nix side is the youngest in the league. That, coupled with the short time frame in which this team has come together, doesn’t necessarily bode well for immediate results for this Wellington side who will be based in Wollongong for the foreseeable future.

Prediction: Wellington seem destined to finish bottom based on their run in to the start of this season. That being said, the team could prove to be a banana skin for other teams, particularly as the season progresses and the squad benefits from playing time together.

Cath Cannuli is at the helm of the Wanderers, seven years after she played for the club. Having served as an assistant since 2017, she knows a lot of these players inside and out. She also knows that there are some building blocks with which she can work from last season.

Bryleeh Henry returns fresh off her Matildas debut while Liz Ralston has swapped sky blue for red and black for the season. The additions of Bianca Galic and Ashlie Crofts are exciting while players like Teigan Collister and Libby Copus-Brown will look to build on their 2020-21 showings.

Prediction: The Wanderers’ inclusions are a step in the right direction for this side. However, a second finals appearance may just be a little out of reach for this squad this season. 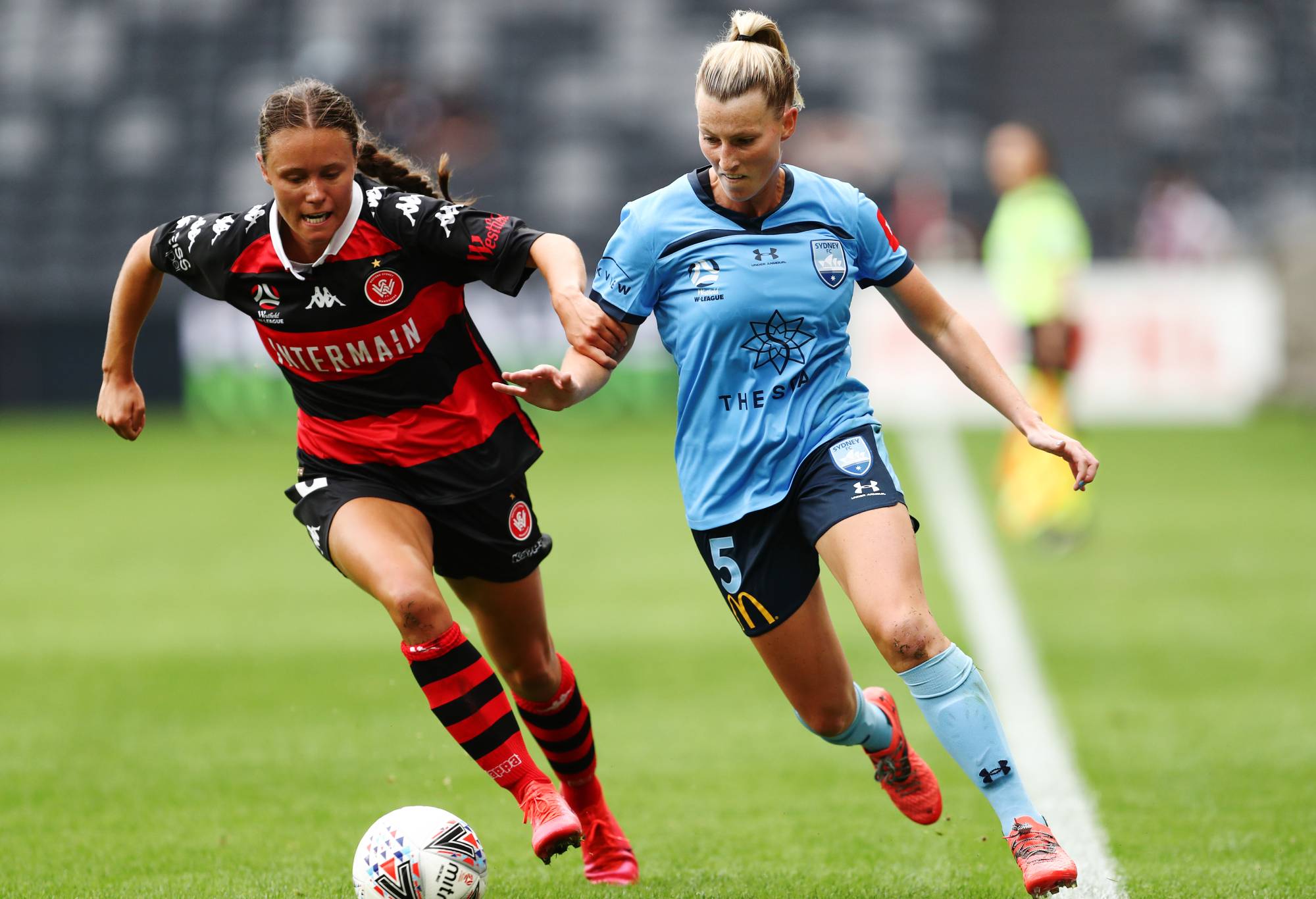 Sydney FC are on the lookout for a new chief executive after Danny Townsend announced he would move full-time to the Australian Professional Leagues.