The Roar
17th January, 2013
16
Join the conversation
4235 Reads
Advertisement
Write for The Roar

Earlier this week, disgraced cyclist Lance Armstrong sat down with the Queen of daytime American television, Oprah Winfrey, and – by all reports – bared his soul about the many demons of his past.

We reckon that’s the least he could do after his doping indiscretions and subsequent denials.

So we’re stealing the moment back and making today’s televised Lance Confessional a damn good opportunity to get tanked and have a laugh at the same time – at him, not with him, of course.

So check out The Roar’s Lance Armstrong Interview Drinking Game below, gather some mates around the telly today, and most importantly, don’t blame us for the inevitable hangover tomorrow.

Below are some of Armstrong’s doping denials since 2001:
2001
“This is my body and I can do whatever I want to it. I can push it, and study it, tweak it, listen to it. Everybody wants to know what I’m on. What am I on? I’m on my bike, busting my ass six hours a day. What are you on?” — Advertisement for Nike

July 2005
“I’ll say to the people who don’t believe in cycling, the cynics and the sceptics. I’m sorry for you. I’m sorry that you can’t dream big. I’m sorry you don’t believe in miracles. But this is one hell of a race. This is a great sporting event and you should stand around and believe it. You should believe in these athletes, and you should believe in these people. I’ll be a fan of the Tour de France for as long as I live. And there are no secrets – this is a hard sporting event and hard work wins it. Vive Le Tour.” — After Armstrong’s seventh and final Tour de France victory

August 2005
“I have never doped, I can say it again, but I have said it for seven years – it doesn’t help.”
— On CNN’s Larry King Live after French newspaper L’Equipe reports tests on urine samples taken from Armstrong during the 1999 Tour and frozen were positive for blood-boosting erythropoietin (EPO).

2005
“… the faith of all the cancer survivors and almost everything I do off of the bike would go away too. Don’t think for a second I don’t understand that.” — In testimony under oath during legal proceedings involving SCA Promotions over a bonus payment for a Tour de France victory.

2007
“I was on my death bed. You think I’m going to come back into a sport and say, ‘OK, OK doctor give me everything you got, I just want to go fast?’ No way. I would never do that.” — Speaking of his life in an interview in Aspen with Bob Schieffer, a respected journalist with CBS and a cancer survivor.

July 2009
“The critics say I’m arrogant. A doper. Washed up. A fraud. That I couldn’t let it go. They can say whatever they want. I’m not back on my bike for them.” — Nike “Driven” commercial in the buildup to Armstrong’s first Tour de France since his comeback from retirement, showing Armstrong training in a Livestrong jersey juxtaposed with images of cancer patients.

May 2010
“It’s our word against his word. I like our word. We like our credibility. Floyd lost his credibility a long time ago.” — Response to disgraced cyclist Floyd Landis’s accusations of systematic doping in the US Postal cycling team.

13 June 2012
“I have never doped, and, unlike many of my accusers, I have competed as an endurance athlete for 25 years with no spike in performance, passed more than 500 drug tests and never failed one.” — Armstrong responds in a statement when the US Anti-Doping Agency announces its charges against him.

23 August 2012
“There comes a point in every man’s life when he has to say, ‘Enough is enough’. For me, that time is now. I have been dealing with claims that I cheated and had an unfair advantage in winning my seven Tours since 1999.” — Armstrong announces he won’t fight USADA’s charges and pursue a hearing to prove his innocence. 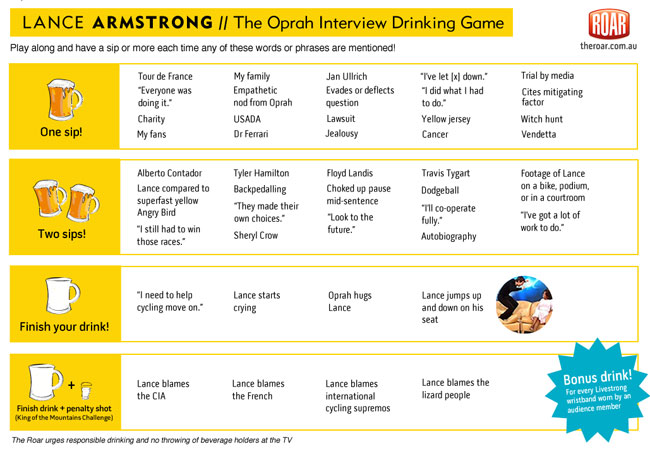