The French public finally had something to celebrate in the 100th edition of the Tour de France as Christophe Riblon (Ag2r La Mondiale) powered solo to victory to triumph on top of the great l’Alpe d’Huez.

L’Alpe d’Huez is synonymous in the world of cycling and the Tour de France, and is the most famous of all the climbs.

Many battles have been fought on those slopes over the years with each of the 21 torturous hairpin bends named after winners who have conquered the great mountain stage.

When the route for the 2013 edition Tour de France was released, revealing that the peloton would not only face one but two times up the great climb along with four other categorised climbs along the route, we knew we would be in for an epic day of racing.

We were not let down as we had some fabulous viewing, the cracks are starting to appear among the favourites and everyone is still racing all the way to the end.

Sure Chris Froome (Team Sky) still has a very healthy lead but the remaining podium spots are far from undecided.

The remaining GC guys are just hoping they can crack Froome and somehow make ground back on him in these last few days or at least claim stake on the final podium spots in Paris that continues to change.

With predicted thunderstorms and bad weather staying away from the stage the riders were able to get on with the job at hand and not have to worry about the potential extra hazards the weather would bring.

Saxo Bank had promised to attack, and attack they did right from the start out of Gap up the Col de Manse.

As any racing cyclist would know, this far into the tour and dangerous attacks from the gun up a climb just hurts.

Your legs are aching, mentally you are tired and sometimes it can take some time to ride into the race.

If you’re not warmed up properly and ready to go, you can find yourself struggling and put on the back foot. I personally know from experience, as I have been in this position before.

Saxo Bank sent riders one after another up the road to try and get as many extra guys ahead as possible for support to Contador and Kreuziger later in the stage.

This sent Team Sky to work as all of them had to take it in turns to chase down these attacks. Even Froome had to show his face when Contador launched an attack to try and put pressure on from the beginning.

After Saxo Bank had settled down, the early break soon formed with none guys of no threat to Team Sky and the overall headed down the road and quickly built up a comfortable advantage.

Again Saxo went on the fore up the Ramp du Motty where Sergio Paulinho and Nicolas Roche managed to get away together but they found themselves stuck in no-man’s land between the break and the peloton.

For Saxo it meant they had extra riders up the road for the climb and later in the race but the pair were never able to make contact with the break or gain a huge amount on time on the peloton.

They were eventually reeled back in on the first ascent up l’Alpe d’Huez. The effort spent being stuck in between would’ve taken a bit out of them so when crunch time came Saxo Bank were at no higher advantage to Team Sky and Froome.

Team Sky were allowed to ride their trademark style up the first ascent of l’Alpe d’Huez, setting a high pace on the front with three of their strongmen in Stannard, Siutsou and López holding the reigns.

They faced a handful of attacks, but only from non-threatening GC riders who were allowed some room to breathe off the front.

Back up the front of the race the break had started to disintegrate the first time up l’Alpe d’Huez.

With the possibility of a stage win up for grabs Riblon and Tejay van Garderen (BMC) had slipped away off the front on the early slopes with Moreno Moser (Cannondale) not too far behind.

Over the top and down the dangerous Col de Sarenne after a little bit of drama with a small mechanical for Van Garderen and a near-crash with a bit of bush bashing for Riblon the three were together as they made it to the bottom.

Back in the peloton the GC guys saved their attacks on the climb for the next time around but as expected Saxo Bank looked for any opportunity to put pressure on Froome as they went on the attack down the dangerous technical descent.

First it was Kreuziger who opened a gap and then Contador quickly bridged across as the two managed to gain a 20-second advantage.

Team Sky were able to reel them in when the road opened out again as they made their way towards the second approach of l’Alpe d’Huez.

Tired bodies, mental fights and one more time up the mythical climb to the finish.

These are the make or break moments this late in the Tour, it is the mental battle that takes over when your body says one thing and your mind says another thing.

It’s about pushing beyond your limits, this is the time where we see guys conquer or come crashing down.

At the front of the race once again van Garderen and Riblon quickly pulled away from Moser on the early slopes of l’Alpe d’Huez.

Van Garderen applied the pressure again and powered on alone, looking strong in a bid for a stage win to make up for his performances earlier in the race when he slid down the overall standings and out of any contention.

He was back to his climbing best and had a strong enough advantage on the chasing peloton to potentially make it all the way to the finish line.

However, Riblon never gave up settling into his own rhythm on his bid to try and peg back Van Garderen and take a stage win for him, the team and France.

Further down the slope it was business time for the remainder of the peloton. Froome has not been one to just sit back and follow to protect his lead at this years Tour, he loves to animate and go on the offensive.

He put in a strong attack on the lower slopes when he saw the likes of Contador struggling.

Perhaps Saxo Bank’s earlier aggression was finally starting to take its toll, as both Contador and Kreuziger couldn’t handle the pace.

Quintana and Rodríguez were able to get across to Froome as the three worked together to put time into the Saxo pair as they all had something to gain.

Richie Porte was able to bridge across to Froome’s group as he continues to show his strengths on the climbs and was there to support Froome all the way to the finish.

On the later part of the climb in the final 5km Froome began to suffer and needed to drop off from Quintana and Rodriguez as the pair opened up a gap on Froome.

A small hunger flat, Froome was desperate for a gel that was needed from the team car to make it to the top.

This later cost him a 20-second penalty and the team a hefty fine for feeding after it had closed but I think they were willing to take this as opposed to complete hunger flat and huge time loses.

Froome had Porte by his side to aid him as the pair rode together still gaining time on the Saxo pair of Contador and Kreuziger.

As the hundreds of thousands of fans who lined this historic climb to cheer on the riders as the past by, it wasn’t enough to get Van Garderen over the line first as Riblon clawed his way back to catch the American with 2km remaining. 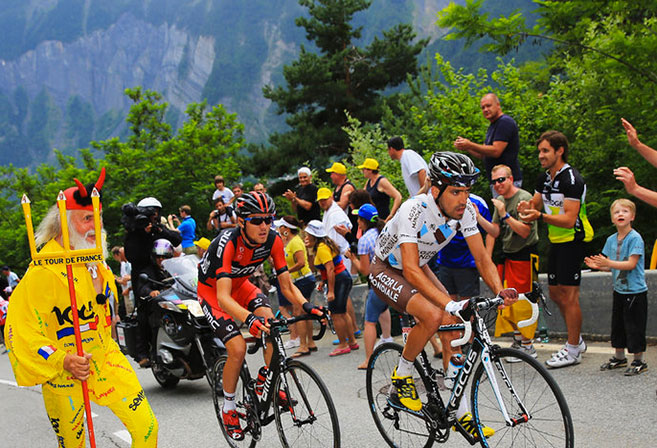 He wasted no time when he reached Van Garderen and attacked straight past as he powered on for the French fans.

Van Garderen was empty; he had nothing left to respond with and he was left watching Riblon ride away to the stage victory.

It was an emphatic win for the Frenchman on top of an incredible climb on what was truly an epic day of racing.

He crossed the line solo with a huge roar from the crowd to add his name alongside many of the cycling greats who have emulated this victory.

Quintana was the first of the GC guys to come across the line with Rodriguez in tow.

For Froome he continues his firm grip on the lead with nothing lost there but even a small gain but with less than a minute separating second to fifth place on the overall, it is continually changing.

Another very hard stage is on the cards tomorrow, there will be plenty of tired guys on the start line but I’m sure we will be in for another exciting stage of viewing.