One of the real great days on the Australian racing calendar is the Golden Slipper Day and it comes around finally this Saturday at Rosehill.

Nine races, five of which are at Group 1 level, highlighted of course by the $3.5 Million Longines Golden Slipper (1200m). Here is my look at the bumper ten race card.

Race One: Irresistible Pools and Spas NE Manion Cup 2400m
Confident that Slipper Day can kick off on the right note courtesy of Our Century. Got the easy kill at Wangaratta, comes here with fresh legs and his wet track form is better than what it reads. I love Big Duke, but fresh at a testing 2400m is the worry, and we know the record of Weir in Sydney. Cafe Society was good last start and leads for fun here.

But I am all over Our Century, ahead of Big Duke, Cafe Society and Kinema.

Race Two: TAB Birthday Card Stakes 1200m
Nancy for me here. Thought she was the winner at Randwick but just got bogged down by the bottomless surface. Hopefully gets firmer here and Bowman steers. Hieroglyphics was very good in that race mentioned above and Avdulla is back on. Big tick. Tempt Me Not hasn’t raced since Derby Day but she is a proven wet tracker and trial was very good.

Nancy on top, to beat Hieroglyphics, Tempt Me Not and Raiment.

Race Three: Quickway Constructions Darby Munro Stakes 1200m
Think there is good value in the shape of Cogliere. Qualified for the Country Championship after winning the Taree heat and that race had good depth.

Maps well here, hard fit, and in form. Improvement had no luck in the Typhoon Tracy and draws to carve over, as does Conchita, who was enormous in defeat first up and has options from the barrier.

Cogliere for me each way, to beat Improvement, Conchita and Tactical Advantage.

Race Four: Ranvet Stakes 2000m
This race is all about Hartnell. If we can overlook the last start flop and go on his prior form, he’d be $1.01 here. $1.90 is very tempting if we knew he’d turn up near his best. Our Ivanhowe has been specifically set for the Sydney Carnival and looked good in the recent trial. The big overs is Sofia Rosa.

High class mare that has been very good in two runs back from a break. She doesn’t deserve to be the rank outsider.

Landed with Hartnell, over Our Ivanhowe, Sofia Rosa and Stratum Star.

Race Five: China Horse Club George Ryder Stakes 1500m
No need to overthink really. Winx just wins, even with the wet track and Chautauqua involved. She’s the best in the world and she’ll show that once again. The only way that Winx will be threatened is if Chautauqua is within striking range on the turn.

If he does his thing of flopping out and giving them a start, he won’t trouble her. Hauraki was good in the Canterbury Stakes and he has the most upside out of that race into this. 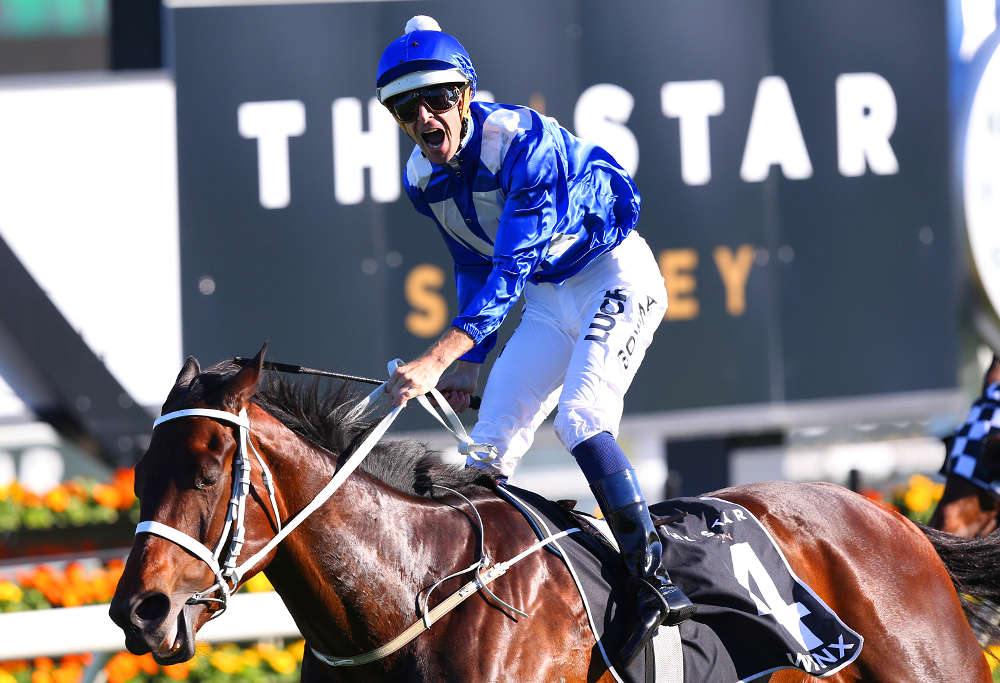 Race Six: Sky Rosehill Guineas 2000m
See no reason to jump of Inference. His Randwick Guineas win was outstanding and he is the one with upside from that into this. I don’t see anything from there turning the tables here. Comin’ Through ran third in that race and was given every chance by Moreira but was no match late for Inference.

He lacks the staying prowess, but he has the brilliance. Anaheim was very good against the bias in the Australian Guineas and will love the rise to 2000m.

Going with Inference, to beat Comin’ Through, Anaheim and Prized Icon.

Race Seven: Longines Golden Slipper 1200m
Houtzen is a star speedster and the one to beat, just the price is the negative for me. Blitzed them with sustained speed in the Magic Millions, then toyed with them at Eagle Farm a fortnight back with 63kg on her back over 1000m.

She’ll lead them and give them something to think about. Will look the winner at some stage. Last 100m will be her query. Wasn’t sure what to make of the Blue Diamond form and the win of Catchy, but it was well and truly franked last weekend, and the manner in which she won, tells me she will love this assignment.

Stable are low flying, she comes here with fresh legs and most importantly, she has ticked the 1200m box. Trekking is the one for me at the price to have a bet on. I am amazed he was on the drift after his Black Opal effort.

I thought the run was outstanding given the tempo was against him, he was first up off one soft trial and did plenty wrong. He’ll eat up the 1200m and is a winner at Rosehill.

Houtzen on top for me in the Slipper, ahead of Catchy, Trekking each way all day with next best being Tulip.

Race Eight: Nathans Famous Hotdogs Galaxy 1100m
Buttering up on Fell Swoop. Got badly galloped on in the Oakleigh Plate which was why he didn’t finish off. Provided he has come through that run well, he has the class to give this an almighty shake, and looks the value in the race. English was given a peach by Shinn to win the Challenge first up. She has a high class finishing burst. Just can’t get too far back. Big Money has been freshened up and has the right form next to his name. He’ll be launching late.

But for me it is Fell Swoop, to beat English, Big Money and the value at long odds is Miss Promiscuity.

Race Nine: Bradford Black Epona Stakes 1900m
Really intrigued to see how Consommateur measures up here. Progressive mare for Mick Kent that was on the Oaks path last year but injury saw her tipped out. Two runs back from a spell have been very good, the latest coming on Feb 22 at Sandown where she finished off with real purpose out wide to get the win.

Will love the rise to 1900m and stable know the right horses to bring for the Sydney Carnival. Happy Hannah was very good first up at Flemington and is suited by the rise in trip. Sofin was out in the quicksand last start in a strong form race and she is one to include at odds.

Consommateur each way for me, over Happy Hannah, Sofin and Song And Laughter.

Race Ten: Provincial Championships Qualifier 1200m
If he can handle the heavy track, then Invincible George should nearly be favourite. Very promising galloper who is resuming but has some excellent form around him, draws a lovely gate and has a lethal turn of foot. Pomelo is the fit runner in ripping form. The worry I have is that the time it ran last start wasn’t overly quick. $4 is rock bottom. Appoint Percy was excellent first up at Wagga and is a proven city performer. He represents value.

Invincible George in the get out, to beat Pomelo, Appoint Percy and Machinegun Jubs.