Is men’s or women’s tennis in better health?

Is a stronger tour one where a handful of players dominate or is it if the highest ranked stars can be beaten by pretty much anyone?

That is more likely to be the case on the men’s tour and the women’s tour respectively.

Since Federer’s first slam win, in 2003, just 11 majors have gone to players other than these three – unprecedented dominance.

The strong contenders of Andy Murray (three slams) and Stan Wawrinka (three), Marin Cilic (one) and Juan Martin Del Potro (one) add credence to the view that the men’s game is strong.

But away from these select few, who is really challenging? Is there a great deal of depth and richness on the men’s tour?

At Masters 1000 level there have been a few cracks in the top players’ monopoly, but nothing seismic.

For a tour to be strong you need three pillars.

One, there must be multiple grand slam winners at the top. Two, plenty of competition from players who can topple the game’s elite. And three, a thriving bunch of youngsters who are making real headway.

On those points alone, it could be argued that the women’s game is in richer health than the men’s.

The top five female players have all won at least one slam and eight slams between them. In the top 15, you can add another slam winner, a 23-time champion, and a two-time major victor into the mix.

Add in the 2017 French Open winner and a five-time slam winner in the top 30, and you have what appears a strong tour.

Since Djokovic won his first slam in 2008, just four players outside of ‘Fedalovic’ have won slams. Other than Serena Williams, 19 different women have won slams in that time period.

That might suggest strength in depth. Alternatively, it shows that the women’s side top players are not particularly strong and that upsets can happen at any time.

For the last decade or so, many top players have suffered early defeats in grand slams. Is this a strength or a weakness?

Heather Watson believes it is the former.

“I feel like it’s not a surprise anymore because it’s pretty common now,” the former British number one told The Ringer.

“Especially in Grand Slams, I feel like lots of seeds go out early quite often because the depth in women’s tennis is very… deep.”

“Before, I felt like top-20 players could get one, two, or three matches at the Grand Slams quite easy and then the whole story starts,” she said.

“That’s why you always see those upsets because it’s just impossible for players to be at 100 per cent every single match, week after week.”

Wozniacki won her maiden slam at last year’s Australian Open. Since then, she has lost twice in the second round, and once apiece in the third and fourth round.

Muguruza has got past the fourth round just once since her 2017 Wimbledon triumph.

Ostapenko has gone out three times in the third round and twice in the first round since winning the 2017 French Open.

Stephens won the 2017 US Open, lost in Round 1 in Australia, reached the French Open final in 2018, and lost at the first hurdle at Wimbledon.

Since Halep reached her first grand slam final, in 2014, she has lost in the first round on five occasions.

Kerber won two slams and reached a final in 2016, but won just six matches in the majors in 2017. She also lost 6-0 6-2 to 35th ranked Danielle Collins, who until this tournament had lost all of the five first-round matches she had played at grand slams. 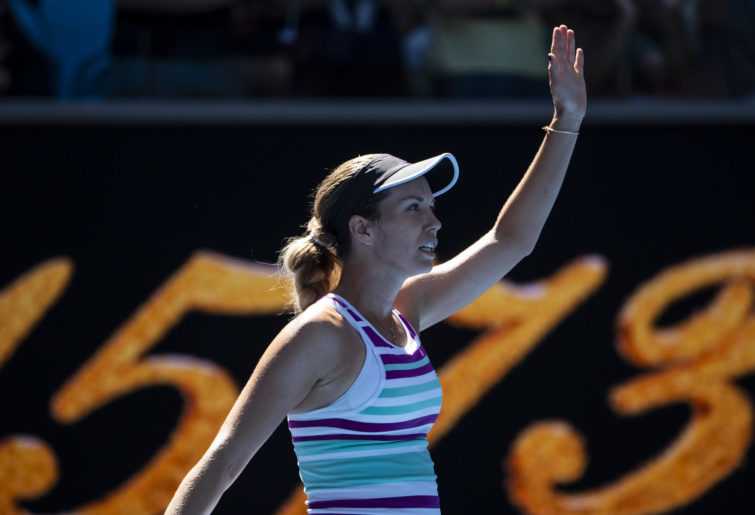 Are these results because they are not consistently good enough, or because there is such a wealth of talent to unseat them? It is certainly up for debate.

This shows that, on the whole, younger female players are making greater inroads into the upper echelons of the sport. This suggests greater strength in depth.

Conversely, the women’s tour could be seen as weaker than the men’s as Serena has had been so dominant for so long. If she is Federer, where are her Nadal and Djokovic?

Certainly, since Justine Henin won her seventh and final slam at the 2007 US Open, Serena has not really had a proper rival to challenge her.

At the age of 37, she is still the player to beat. History teaches us that 37-year-olds should not be challenging for slams.

But Federer has and is still doing that at the same age as Serena. The two defy logic. So maybe both tours are not in the richest health?

It depends which way you look at it.

In terms of the future, the women’s game is not veering towards the edge of a cliff, like the men’s game is – when Fedalovic all retire, there will be a gaping hole.

In terms of demand, however, the public appears to follow men’s tennis more. This is apparent when you look at the contrast in ticket prices and viewers.

At Wimbledon, The Independent outlined how tickets for both finals cost £170 for the women and £230 for the men.

If women played best-of-five set tennis, this could change. But that is for another article.

The point is, when Fedalovic go, the interest in the men’s side of the sport is likely to drop off substantially.

This will happen to a lesser extent on the women’s side when Serena retires.

If you like the status quo, stick with the men’s side. If you like unpredictability, the women’s game is for you.