Ash Barty will play her second round match at Wimbledon on Court 2 tonight at 8pm (AEST) and in typical Barty fashion that’s just fine with her.

“There isn’t a bad court at Wimbledon so wherever I’m scheduled to play on, we’ll go out there and do our best,” she said.

“The size of the court, they’re all the same. The lines are the same.”

However, if you take a glance at social media, she shouldn’t be happy. She should be furious. Livid. She should be Daenerys-with-a-fire-breathing-dragon mad that the organisers have snubbed her.

The outrage brigade has decided that what they’ve done to our Aussie girl is reprehensible. Ash Barty is the world no.1 and she should be on Centre Court no matter what.

I’m not surprised by this predictable fake outrage that was given extra fuel by Channel Seven’s scheduling dramas in Round 1 when they had the tricky situation of dealing with Kyrgios and Barty playing at the same time.

Why is it fake outrage?

Well, scheduling at Grand Slams has always been one of the toughest balancing acts.

Not only do you have 256 men and women players on the singles side but you have doubles and mixed doubles during the opening week to contend with. Out of those 256 players in singles, there’s always going to be players who feel like they deserve more of the limelight on any given day.

But most suck it up and get on with it, knowing the deeper they go in the tournament the more likely they are to be on a show court.

There’s also the local factor which happens at every Grand Slam.

Barty is on Court 2 tonight (which is still a premium show court, by the way) partly due to the large number of Brits playing.

Cameron Norrie and Jay Clarke on the men’s side and Johanna Konta on the women’s are three that organisers wanted to feature on Centre Court and Court 1.

The same thing happened in the Australian Open this year – which everyone seems to have conveniently forgotten about. First seed and 2018 runner-up Simona Halep was given Margaret Court on Day 2 instead of Rod Laver Arena.

It probably had something to do with Australia’s Destanee Aiava making the main draw as a wildcard. The organisers wanted to give Aiava the spotlight at her home grand slam, so she was put on centre court against Kaia Kanepi. She lost in straight sets but what an experience for Aiava to have!

Was there any outrage from Halep or indeed Romanian media that the top seed was snubbed? Of course not.

Outside of giving precedence to local players, Wimbledon also tends to reward consistency and champion players. We know Barty has had a meteoric rise but she is yet to make her mark at the All-England Club. Her best performance in the singles was the third round last year.

Whether she’s playing on Centre Court, Court 2 or Court 18, Barty only cares about beating her opponent down the other end. She wants to prove that she belongs at the top of women’s tennis and what court she plays on is irrelevant.

You still have to win seven games straight.

Even Nick Kyrgios would have been proud of this from Jordan Thompson! 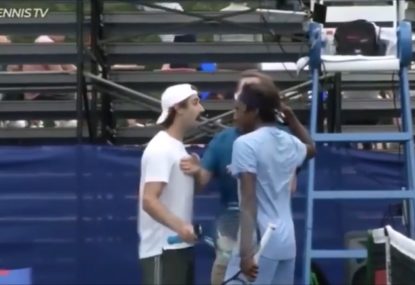 Novak Djokovic is the perfect person in the perfect place to make the perfect apology – for his own sake. Dear Mr Djokovic, I won’t start with, ‘I hope you are well’, because I can tell that you are not. I am a mother to two tennis players, so I understand and I care. You […]

In case you’ve been living under a rock, Novak Djokovic just won Wimbledon.

Australian tennis star Alex de Minaur has tested positive for COVID-19 and is out of the Tokyo Games, the Australian Olympic Committee has confirmed.

Roger Federer has withdrawn from the Tokyo Olympics after picking up a knee injury during the grasscourt season.