Over its last six stages, the Tour showed why for decades it has been making a mockery of bookmakers, their odds, and those who stake their earnings on them.

Julian Alaphilippe went into the final week of the race in the lead, holding 95 seconds over defending champion Geraint Thomas. Other favourites such as Steven Kruijswijk, Egan Bernal, Emmanuel Buchmann and Pinot circled like sharks close behind.

Stage 16 would not provide any definitive answers on who would win the general classification, only on those that wouldn’t.

It was a pan-flat 177 kilometres, starting and finishing in Nimes – a city which really got their money’s worth from the Tour this year: they also hosted the rest day.

Geraint Thomas had a scare, suffering an innocuous-looking crash that lost him only skin and a bit of pride. Jakob Fuglsang however had a more serious fall, and his already fading hopes dimmed out completely when he abandoned the race. Nothing was broken, but the crash was the final straw that ended a bruising couple of weeks for the Dane.

When the sprint finish finally came there was more Australian success: Caleb Ewan took his second stage win of the race, ahead of Elia Viviani and Dylan Groenewegen. 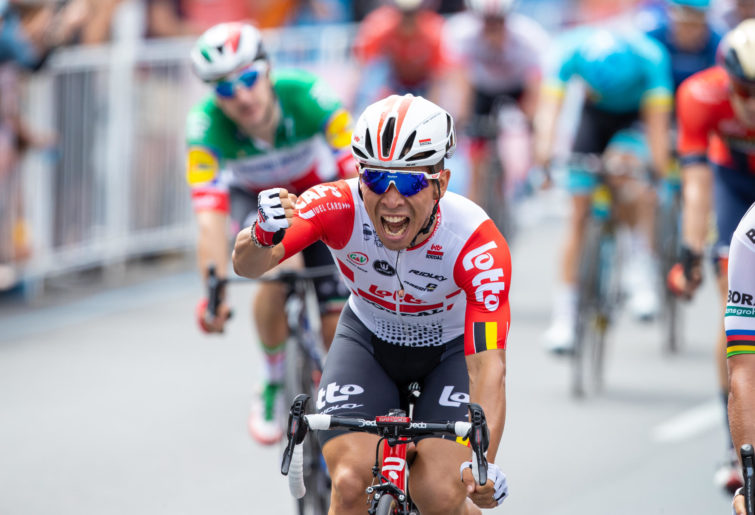 Stage 17, 200 kilometres exactly from Pont du Gard to Gap – a traditional Tour de France location – should have been quiet for the peloton. A breakaway group of over 30 riders was let go, and were on their way to contesting the stage, when an altercation between Jumbo-Visma’s Tony Martin and Team Ineos’ Luke Rowe ended with them both being thrown out.

The consensus was that the decision was harsh, but there is no process of appeal on a race commissaires’ decision, so both men left the Tour, leaving Kruijswijk, Thomas and Bernal without their road captains right before the race hit the Alps.

Matteo Trentin rode one of the best rides of his career, soloing away from the breakaway group on the last climb of the day, winning alone by over 30 seconds in Gap.

Stage 18 was when the race finally hit the Alps, and again another huge breakaway of over 30 riders was let go. Tim Wellens continued his assault on the King of the Mountains competition, but by the time the race hit the famous Col du Galibier, an 11-man group was five minutes in front of the peloton.

Nairo Quintana attacked, allowed into the group because he was well outside the top ten and overall contention. He wouldn’t be caught, despite the best efforts of Romain Bardet and Alexey Lutsenko, and his performance was so strong he gained over five minutes over some of the favourites, leaving himself in seventh on GC – just under four minutes down on Alaphilippe.

Bernal attacked from the yellow jersey group and took 30 seconds, which moved the young Colombian up to second, only 90 seconds behind Alaphilippe, who continued to impress by staying with the main contenders.

Stage 19 was the first of two consecutive summit finishes that would decide the overall winner. They did so, but in a way that no one would have guessed.

The French had been having an amazing Tour going into the stage. With Alaphilippe wearing yellow and Pinot the strongest in the Pyrenees, it was beginning to look genuinely possible that there would finally be another Frenchman ride into Paris wearing yellow.

But Stage 19 dashed those hopes.

Around 40 kilometres in, Pinot said an emotional goodbye, having to be consoled and cajoled off his bike by friend and domestique William Bonnet. It turned out he had torn a muscle in his leg and had been riding in pain for a couple of days.

The peloton were close behind the breakaway and on the Col de l’Iseran, Bernal attacked and left the race behind. By the top of this year’s highest point, Bernal was 13 seconds ahead of Simon Yates – who had been in the breakaway – but crucially, nearly a minute ahead of Thomas and Kruijswijk, and nearly two minutes ahead of the yellow jersey.

Bernal descended alone initially, only to be caught by Yates. The two were working together to hold off the chasing group of favourites, which Alaphilippe was working on getting on terms with, when the race was thrown into chaos.

Pictures emerged of hailstorms battering the final climb up to Tignes, and when another picture showed a mudslide across the road, the race was first neutralised, then cancelled. The time gaps, crucially, would be taken at the top of the Col de l’Iseran.

Bernal had been denied what would have perhaps been the most impressive win of the race, but the times at the top of the Iseran meant that the 22-year-old was in yellow for the first time in his career. Alaphilippe was 45 seconds back, and Bernal’s Ineos teammate Thomas was over a minute down.

The GC was Bernal’s to lose, and this looked even more unlikely when news came that the final stage to Val Thorens had been shortened to just 59 kilometres. The riders started in the original start town of Albertville, but a large section that was deemed unsafe was cut, before a 33-kilometre climb to Val Thorens.

Incredibly, a breakaway escaped, and Vincenzo Nibali was the strongest man in it. The 2014 Tour champion wouldn’t be caught, and finally achieved his goal for the race: a stage win.

Bernal had one job: keep the rest of the favourites in the same group as him.

His grip on the Maillot Jaune tightened when Alaphilippe finally cracked in earnest with over ten kilometres left to climb. He shot out the back of the group thanks to the high pace of Kruijswijk’s Jumbo-Visma team.

But the attacks expected from the other favourites never materialised. Movistar duo Alejandro Valverde and Mikel Landa were second and third on the stage, but next over the line was Bernal, side-by-side with Thomas.

Bernal had effectively won the overall on the Iseran and stamped his authority on the climb to Val Thorens. He would become the first Colombian winner of the Tour de France. 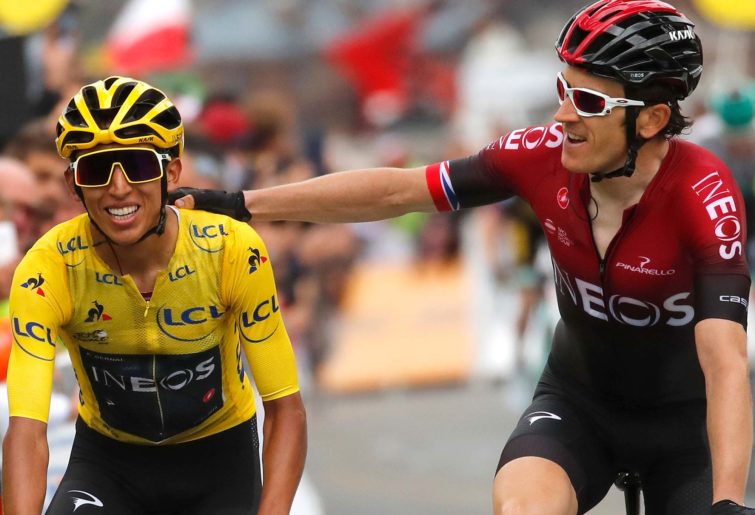 The final, largely ceremonial stage into Paris started in Rambouillet and there were the usual photo ops, complete with champagne, for the various winners of classifications. Bernal rode into the City of Lights as the winner, with Thomas and Kruijswijk rounding out the podium.

Peter Sagan took a record seventh green jersey, Romain Bardet was the King of the Mountains, rescuing an otherwise abysmal Tour for the Frenchman. Bernal was also the best young rider thanks to his incredible youth, Movistar were the best team, and Julian Alaphilippe – who else – was the Tour’s most combative rider.

The sprint on the Champs Elysees was won by Caleb Ewan, who finished the Tour with three stage wins to comfortably state he was the race’s best sprinter. He beat his main rival this year, Dylan Groenewegen, on the line.

Bernal rode over the line hand-in-hand with 2018 champion Thomas.

The 2019 Tour de France was brilliant, containing hard racing, panache, Frenchmen lighting it up like they haven’t in many years, and five or six men who genuinely looked like they could win it. It showed why fans, pundits, and riders alike keep coming back, even through scandal and occasional boredom.

It’s the best bike race in the world. Same time again next year?

Nine months ago, West Australian cyclist Ben O’Connor was at a crossroads in his career. Going into the 2020 Giro d’Italia, the 24-year-old from Fremantle was without a contract, with his team NTT having lost their major sponsor. Fast forward to June 6, 2021, and O’Connor is recuperating with his French team in the Alpine […]