It’s crunch time! Just two weeks to go in this year’s home-and-away season and there’s finals place to secure and tipping legacies to be made.

We’ve got two matches featuring two top four sides and another four games that will have significant sway over the makeup of this season’s top eight.

If that wasn’t enough, two of the three ‘other’ matches are virtually impossible to split.

On the tipping ladder, Marnie Cohen maintains her two-point lead with as many weeks remaining, while both myself and AdelaideDocker share second place.

The Crowd is virtually unassailable at this stage with a four-point overall lead, while Daniel Jeffrey is just an all-around top bloke.

A bottom-four blockbuster kicks off an otherwise entertaining weekend, with this year’s biggest disappointments Melbourne tackling a young Swans side out of steam.

Sydney are desperately unlucky to be called losers of six straight, but a consistent theme in those (mostly tight) losses has been hapless domination in the ruck. Against Max Gawn, that spells disaster.

Carlton’s clash with St Kilda should be an entertaining look at two teams with plans to make progress up the ladder next season. Clubs often win their first match with a caretaker in charge, but I feel the opposite is true in the first match after they put pen to paper.

The Saints looked slick with Jack Steven and Dan Hannebery finally in the same lineup last weekend. Brett Ratten would’ve had this fixture circled the day he got handed the reins too, so I’ll back the Moorabbin mob to take the points here. 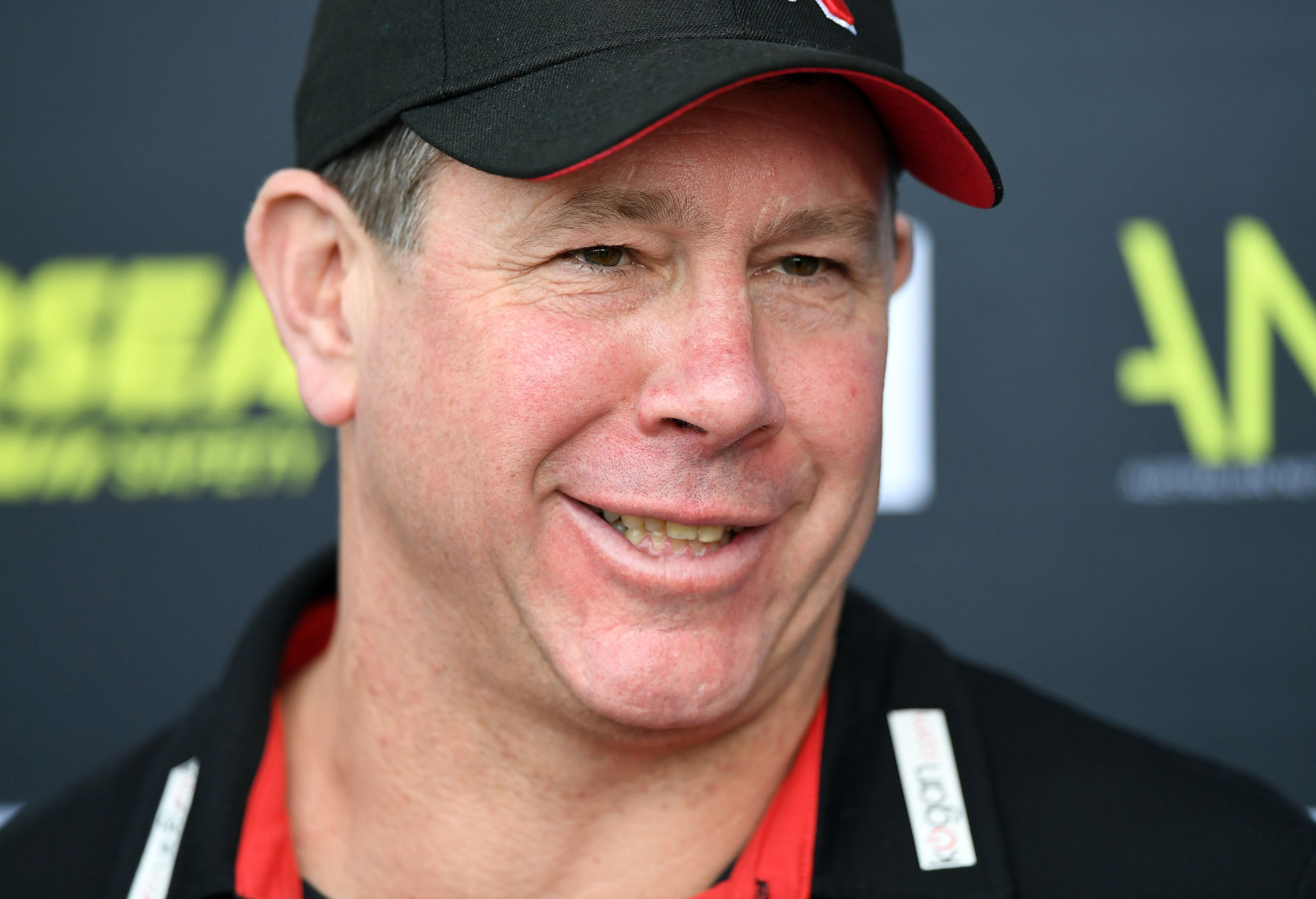 Brett Ratten would love nothing more than to get one on the side that sacked him in 2012. (AAP Image/Julian Smith)

Then, things start to get really interesting. Nobody would have pencilled Brisbane vs Geelong as a top-two clash at the start of the season and nobody would have had the Lions as the warm favourite in that clash – but here we are.

Chris Fagan’s charges seem due for a rough week after so many wins, but they’ve just looked so good post-bye and the Cats haven’t. Home side in a classic.

Collingwood may have won their last two matches, but I don’t give out brownie points for thumping Gold Coast and struggling to get past the Demons. Adelaide are far from in good form, but I’ll back them to get the points over the injury-riddled Magpies.

Port Adelaide seem to be doing the opposite of their stunning late-season collapse from last season and, coupled with a good recent record against their opponents, should put one hand on a finals spot with a smart win over North Melbourne.

Essendon’s torturous fortnight looks set to become a hellish three weeks too. They’ve not beaten the Dockers in Perth since 2013 and Freo, armed with the sentiment of Aaron Sandilands’ retirement and those kitschy green and red ‘retro’ jerseys, should get the job done.

Sunday starts with the match of the round at the MCG and, while listeners of the Game of Codes podcast will hear me backing the Eagles in today’s episode, since recording I’ve reconsidered.

Everyone’s going on about Trent Cotchin’s absence tipping the scales in West Coast’s favour – fair given they play the MCG really well. But I reckon every time this season we’ve harped on about the Tigers being too wounded to get the tip, they show us up. I think it’ll happen again.

The Bulldogs are every chance of making the finals race very interesting when they play the Giants away, but the return of Josh Kelly has my money on Greater Western Sydney.

The Shoe-In of the Week this week quite simply has to be the round-concluding stinker between Hawthorn and Gold Coast at Docklands. If this wasn’t Jarryd Roughead’s farewell game, I reckon we’d be lucky to get a five-digit crowd.

Can someone please help me make up a good excuse to get out of all my social arrangements this weekend? I simply cannot miss this mouthwatering weekend of footy.

In what has been such an even season with some cracking contests, this looks to be our best weekend yet.

I genuinely think all but one of these games can go either way. For Hawthorn and superstar Jarryd Roughead, one would assume the Hawks will send him off the appropriate way, with a big win in front of an adoring Marvel Stadium crowd.

As for the rest, it’s anyone’s game.

Like Hawthorn, Freo are relying on the emotions to give them the extra edge this week, with big man Aaron Sandilands announcing his retirement at season’s end. With Sandy currently stringing a few games together and this weekend Freo’s last home game for 2019, one would think this will be his last hoorah and it’ll be a victory.

That and Essendon are looking like a shell of the side that recently won six games on the trot. Lots of injuries and lots of turnovers the reason for their downfall and I don’t know if it’ll be an overnight fix. 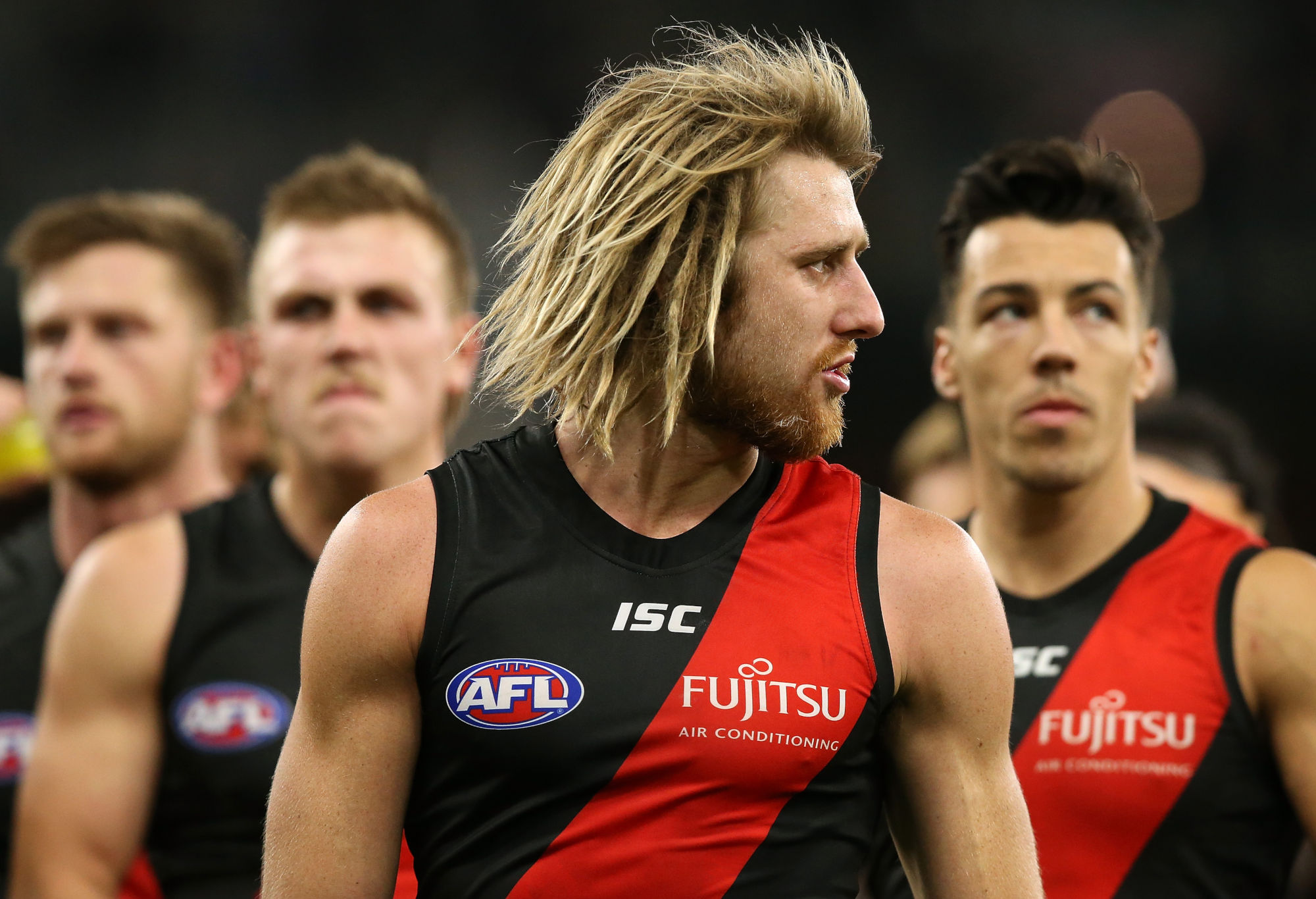 Essendon’s season could continue to spiral at the worst possible time. (Photo by Paul Kane/Getty Images)

At this stage, I think Sunday’s game between Richmond and West Coast is a preview of our grand final. It can truly go either way. Both teams love a big game and both teams love the MCG. No logic behind my tip other than I still believe West Coast is the competition benchmark.

They just keep finding a way to win games when challenged. It’ll be close, but I’m going for the Eagles.

If 3 vs 4 isn’t enough, then there’s 1 vs 2 at the Gabba on Saturday afternoon. It’s impossible to go past the Lions at the moment, isn’t it?

Half of me was tempted to tip Geelong because your mind wonders about how a young side can sustain this red hot form, especially coming up against the class and experience of Geelong.

But I’ve backed the energetic, exciting Lions – especially at the Gabba which has become a fortress this year.

The two South Australian sides should get wins this weekend, making their dance for eighth spot even more interesting than it already is. North will be hungry to rebound (and kick more than one goal) after an abysmal performance in Geelong last week, but Port Adelaide have had a sensational two weeks – and they haven’t lost a game to the Roos since 2014.

As for Adelaide and Collingwood, neither side is playing spectacular footy, so you back Adelaide at home.

I’m tipping the Giants to bounce back after their stone-cold performance against Hawthorn. A possible return for Josh Kelly, Matt de Boer and Harry Himmelberg is too tempting.

Tipping the Dees over the Swans simply because of the Melbourne factor and Blues over Saints in the interim coach cup.

When the AFL made the draw for this season, they would have pencilled in Sydney-Melbourne as one of the more enticing Friday-night matches of the year. Pity about that. Both have been notching disappointing result after disappointing result, but I think the Swans have showed a little more despite their recent scorelines.

David Teague’s full-time appointment should spur the Blues onto a win over the Saints, and Brisbane are good enough to get the job done at home over the Cats. Geelong haven’t played a top-four side since they were toppled by the Giants in Round 4, and a win against a poor North outfit isn’t enough to convince me they’ve turned a corner with their form.

I’ll also give the benefit of the home ground to Adelaide when they host the Magpies. The Crows put in a much-improved display against West Coast last week, and they simply need a win against the Pies.

The last two Saturday night games could quite easily go either way, but I can’t bring myself to tip either the Kangaroos or Bombers after the dross both sides dished up a week ago.

A win for Port will just about seal their finals spot, while Fremantle will put Essendon precariously close to falling out of the eight.

Richmond and West Coast should be a belter on Sunday arvo. The Eagles play the MCG well (they’ve won their last five at the ground) and are one of the form teams of the comp. Mind you, Richmond are too, but Trent Cotchin’s absence tips the balance in favour of the visitors.

The last two games of the round appear relatively straightforward. The Giants will respond against the Bulldogs, and well, after last week’s limp display, particularly with Josh Kelly expected to return.

As for Hawthorn, they’re playing the Suns. Nothing more need be said.

My tipping lead remains lost, and I’m eager to garner it back. I have a kinda good feeling about this week, though. Of course, I’ve naturally just jinxed myself.

There are a few absolutely cracking games this week, and let’s discuss them in tiers of excitement.

Tier one, for mine, is Saturday’s Brisbane-Geelong clash and Sunday’s Richmond-West Coast MCG encounter. It’s second versus first and fourth versus third, respectively – with neither too easy to tip.

Brisbane’s the form team of the competition at the moment with eight wins on the trot but, despite Geelong’s form woes in recent weeks, they still ooze competitiveness and can be hard to beat on their day. I’ll back the Lions, purely because they’re at home – and because Geelong are arguably the worst side out of the top four at the moment.

The second clash is a little harder. The Tigers and Eagles are in great form and, according to some pundits, are the grand finalists apparent. The game being at the ‘G swings the needle a little in Richmond’s direction, and when the game is tough to split, I’ll follow it.

Richmond to win by a super slight margin, although the Eagles have proven themselves to be challengers at the home of footy. 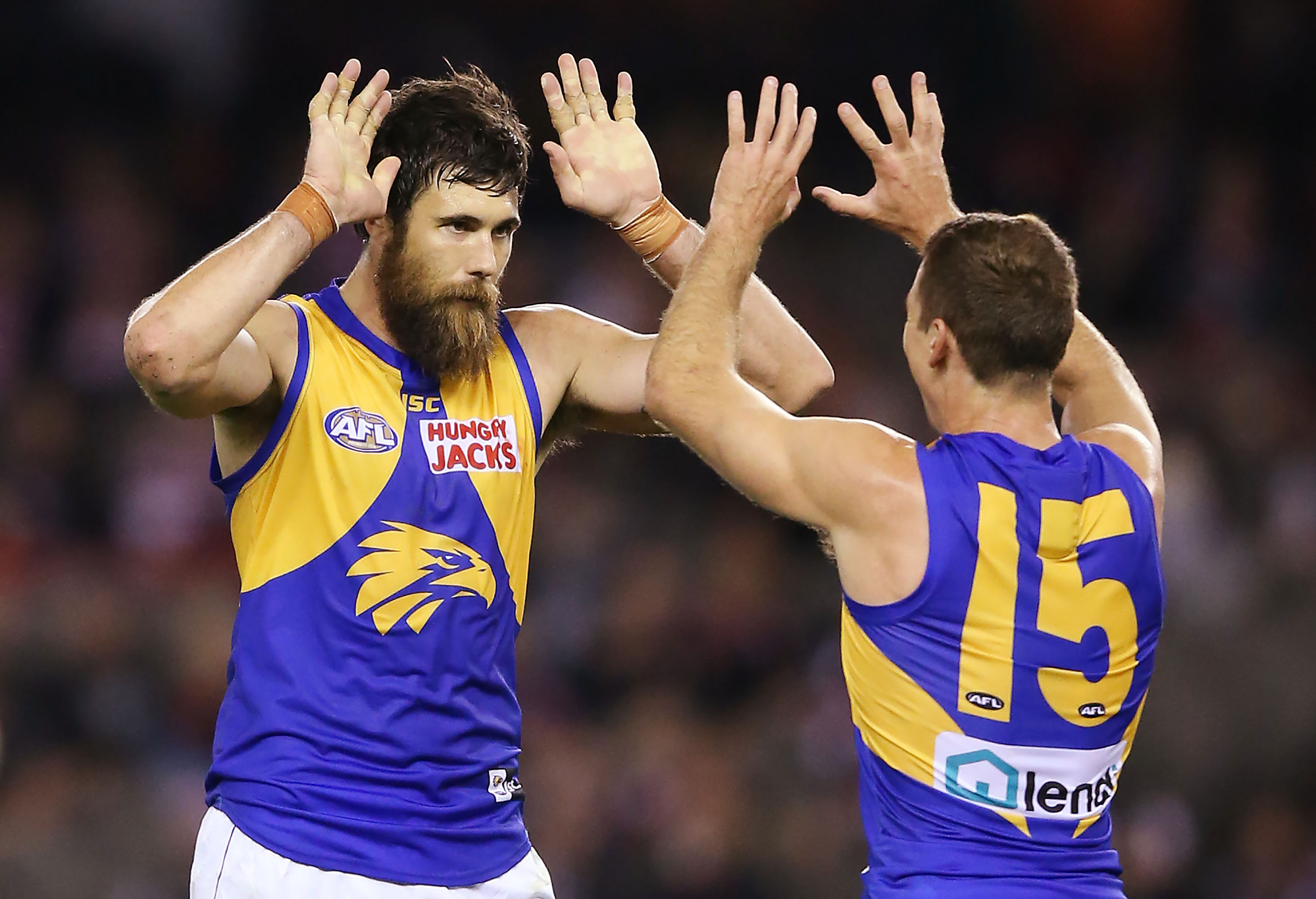 West Coast play well at the ‘G, but will it be enough? (Photo by Michael Dodge/Getty Images)

Tier two on the weekend’s excitement scale are the Crows-Collingwood and GWS-Bulldogs match-ups. Both feature certain finalists up against potential finalists, and both are, again, reasonably difficult tips.

I’ll go Collingwood for the first clash – they’re in better form and Adelaide, despite regaining a little confidence in an impressively played loss last weekend, are still tenuously holding their position in the eight.

The Bulldogs are fighting hard to get in the eight and after what was essentially a bye last week will head into the clash in good spirits.

GWS were horrible last week, but I’m going to tip them (this might backfire on me, with the upset potential).

The rest of the games are a little easier. Expect to see St Kilda defeat a coached-officially-by-Teaguey Carlton (although, again, an upset here is not out of the question), Port to easily beat North Melbourne and Fremantle to shake off last week’s narrow loss to bounce back against a horribly out of form Essendon.

There’s one game I haven’t mentioned, and that is the least anticipated Friday night match in a long while. Melbourne hosting Sydney. I’m going Sydney.

Sunday’s final game is Hawthorn hosting the Suns; this’ll be a percentage booster for the home side. Hawks to win by plenty.