The Roar
4th September, 2019
34
Join the conversation
4389 Reads
Advertisement
Write for The Roar

While the final result of Pool B at the 2019 Rugby World Cup seems to be more or less a foregone conclusion, it will bring us what is likely to be one of the games of the tournament.

New Zealand and South Africa will almost certainly claim the top two spots, and the rivals’ clash on the opening weekend of the tournament is a mouthwatering one, and not just because it will determine who avoids a likely quarter-final with Ireland, the clear Pool A frontrunner.

Alongside the All Blacks and Springboks, Pool B also includes Canada, Italy and Namibia.

Canada
After failing to get the job done in their opening qualification rounds, Canada had to rely on a repechage tournament to make the World Cup.

There, they came away with commanding wins over Germany, Hong Kong and Kenya to qualify for the showpiece tournament.

Still, their form is poor, having lost to the USA, Tonga and Fiji at the Pacific Nations Cup, before falling to Leinster in a warm-up match.

The North American side won’t be expected to do a great deal in Japan, however, a settled squad at least leaves them in the running to take third place in the group.

Italy
Italy, who had a top-12 finish in 2015, didn’t need to qualify for this year’s edition, but the perennial bottom team in the Six Nations will struggle to do anything of note in this pool.

They come into the tournament without much experience at the Rugby World Cup, although legendary skipper Sergio Parisse goes into his fifth tournament.

The formline for the Europeans has been mixed. While they belted the living daylights out of Russia 85-15 just a few weeks ago, they have come away with heavy losses to France and Ireland in their other warm-up games.

Namibia
Namibia hold the unwanted record for biggest losing margin in the history of the World Cup, when they fell to Australia 142-0 in 2003.

They have come a long way as a minnow rugby nation since then. In the Africa Gold Cup where they booked their spot for Japan, they came away with five wins from five over Kenya, Uganda, Tunisia, Zimbabwe and Morocco, finishing with a positive points differential of 278.

Their most recent matches against South African club sides have seen positive results, however, a loss to Russia in the World Nations Cup, held in Uruguay during June, is a major concern given the quality of opposition they face in Group B.

New Zealand
The best team in World Rugby, the All Blacks will once again be led by Kieran Read as they shoot for a third consecutive title.

They do have some minor fitness issues in their squad, with Richie Mo’unga, Jack Goodhue, Brodie Retallick and Ryan Crotty all selected despite injury clouds.

However, it’s still a richly talented squad, which has left out Ngani Laumape and the experienced Owen Franks, both of whom would be walk-up starters in most other Test sides.

At the time of writing, New Zealand’s last games were the Bledisloe Cup, which they retained after losing Game 1 but hammering Australia in Game 2, and a disappointing first two fixtures of the Rugby Championship, when they narrowly beat Argentina and had to settle for a draw with South Africa.

South Africa
While New Zealand may have been concerned following the draw with South Africa, the Springboks would have been anything but.

It was a successful Rugby Championship for the Springboks, who also beat Argentina and Australia to claim their first ever title since the competition shifted to the four-team format. They then beat the Pumas again in their most recent match.

They play Japan in Japan this coming weekend as well, so will be getting prepared in the exact conditions they will face during the tournament.

In a big plus, skipper Siya Kolisi has overcome a knee injury and will play in what is a fairly settled World Cup squad, although the Boks will be without Aphiwe Dyanti on account of a hamstring injury, although the star winger is also currently facing a lengthy doping ban.

New Zealand vs South Africa
Saturday, September 21, 7:45pm
There are no prizes on offer for picking the biggest match in Pool B, and of the entire group stage.

Two of the fiercest rivals in world rugby, South Africa and New Zealand have perfectly split their last three meetings: one win apiece and one draw, and a combined margin of zero.

This has the potential to be an instant classic, and if all other matches in the group go to script, it should also decide first place in the pool.

Italy vs Canada
Thursday, September 26, 5:45pm>
Apart from the fact this has the potential to be quite a good match, it’s extremely important for Italy.

After another dismal Six Nations campaign earlier this year, the pressure continues to grow on the side. While no one expects them to get out of the group at the World Cup, they need to beat Canada, and beat them well.

South Africa vs Italy
Friday, October 4, 7:45pm
The Springboks shouldn’t have any problems with Italy, but they’ll likely still need to win this match to confirm a second-placed finish in the group.

South Africa were stunned by an upset in 2015, when Japan produced one of the all-time great World Cup wins, and they’ll want to avoid a similar shock this time around.

For the full Pool B schedule, head over to our Rugby World Cup fixture page.

This section only features players from the sides we expect to miss the knockout stage. Those eight teams will be previewed in depth before the start of the tournament.

Tyler Ardron (Canada)
Ardron will be familiar to Super Rugby and Mitre Ten Cup fans, having played for both the Chiefs and Bay of Plenty.

He is one of the best players in the Canadian squad, and at just 28 years of age, already has 33 international caps.

He was a fan’s player of the year nominee for the Chiefs after their 2019 Super Rugby season and had an average gain of almost five metres per run, as well as being successful in 87 per cent of his tackles during the recently completed season. 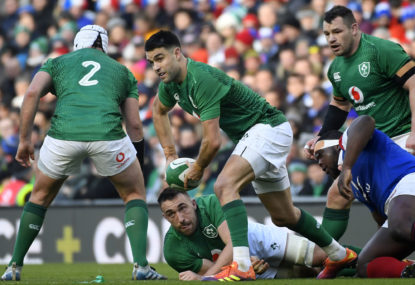 Alessandro Zanni (Italy)
Zanni is going into his fourth World Cup for Italy and has over 100 national caps. Currently playing Benetton in the Pro 14 competition, the back rower, who can also slot in at lock, has been playing for the national team for 14 years.

He brings a wealth of experience to an Italian side which is light on in that department and will have a critical role to play for the European nation.

Lesley Klim (Namibia)
Klim may still be an up-and-comer in the international arena, but he has made a name for himself on the wing at Ospreys and already has nine tries in 12 Tests for Namibia.

The 24-year-old will need to capitalise on every opportunity presented in what could be a tough World Cup for the African nation, but don’t sleep on him doing something brilliant once or twice.

It’s pretty obvious which way this pool is going: New Zealand and South Africa are going to advance, unless there’s a major shock, one to rival Japan beating the Boks in 2015 (and even that didn’t stop them from making the semi-finals). We will take the All Blacks to get top spot.

Italy, as a Six Nations side, should come away with third ahead of minnows Canada and Namibia, but a case could be made for each of those three sides to wind up in the middle of the pool.