Along with Collingwood, this was only one fewer than the player exodus from Greater Western Sydney, the leader of the pack.

This was appropriate given these three teams would have been considered the underperformers of the year and are therefore in need of a major tweak of their playing lists to remain competitive in 2021.

However, neither side said farewell to any of their few top 100 game players during the trade period, although both teams lost one located near the bottom of the list due to retirement.

In Essendon’s case it was Tom Bellchambers, who played seven games in 2020 to finish tied in 95th place on the Bombers top 100 game players list. One of the players he finished up tied with is Jim Anderson, ranked as the first player to represent Essendon in the VFL. Anderson was picked in the team for the first game against Geelong in 1897 and, as the list was done alphabetically, the 27-year-old, who had been playing for Essendon in the VFA since 1894, was the first name on the list. Anderson went on to captain the Bombers and finished his career with two premierships to his name.

The other player on 136 games at Essendon is Underbool recruit Max Crow, who played at three different VFL clubs in the 1970s and 1980s. At Essendon he won the goal kicking in 1977 and at St Kilda he won the best and fairest in 1983.

The four top 100 players at the club at the start of 2020 were still there at the end and have been joined by Bellchambers and Zach Merrett, so five top 100 game players will be representing Essendon in 2021.

They will not be joined by anyone new as the next most senior player, Joe Daniher, has departed for Brisbane. Daniher would not have played enough games anyway, and the next most experienced player, Anthony McDonald-Tipungwuti was two games behind Daniher – even if he keeps his run of consecutive matches going – the second-best in the League- the exciting goalscorer would not qualify until mid-season 2022.

Apart from Zach Merrett (who would be hoping to reach the 150-game milestone next season), the four other current top 100 game players lining up for Essendon in 2021 will be David Zaharakis, Cale Hooker (both are 200-plus game players), Michael Hurley (who would hope to join them in 2021) and Dyson Heppell.

Zaharakis, who escaped suspension in the dark period of the Dons’ past, currently sits in 23rd position on Essendon’s all-time top 100 game players list and should move comfortably inside the top 20 given a reasonable 2021 with form and fitness.

Goal kicking wise, Essendon were surprisingly well placed, with five centurion goalscorers on the list, but the main one of these was Joe Daniher, who was the only Bomber inside the club’s top 50 goalscorers. With him moving north to Brisbane and fellow centurion Orazio Fantasia moving west to Port Adelaide, the club is left with only three centurions and Cale Hooker, who made the top 100 list with a total of 89 goals.

No doubt the club will be hoping not only Jake Stringer kicks the seven goals he needs to become a top 100 goalscorer at Essendon but also many more work their way up the ladder, helping the Bombers to do the same.

That’s one way of getting your first goal of the game! 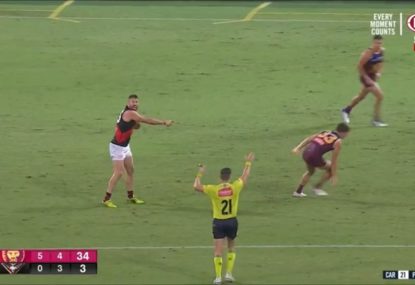