'I love her to bits': McDonald wins first Melbourne Cup as Verry Elleegant brings down Incentivise

Verry Elleegant, carrying the most weight by a Melbourne Cup winner after only the great Makybe Diva, upset raging favourite Incentivise to claim the 2021 Melbourne Cup at Flemington on Tuesday.

“It’s what dreams are made of, I can’t honestly believe it,” said McDonald, who howled with delight moments after crossing the finish. “I have so much faith in her, I love her to bits. She’s trained by a master and she’s a superstar and I’m so proud of her.”

Verry Elleegant carried 57kg, one less than Makybe Diva when it won the third of three Cups in 2005.

Incentivise, whose price ranged from $2.30 to $3.00 before starting at $2.80, was aiming to become the 12th horse to complete the famous Caulfield Cup and Melbourne Cup double in the same year and was the heaviest backed horse in Australian racing history. 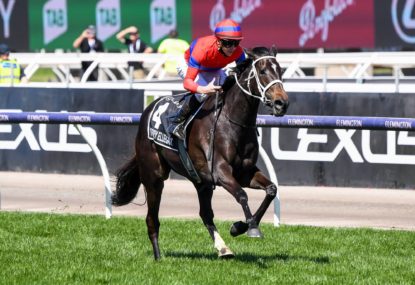 It was run down with 600m to go to finish second, continuing a poor run for favourites in the race – the last favourite to win the Cup was Fiorente in 2013. Spanish Mission was third.

The race was run in front of 10,000 fully vaccinated racegoers while the pandemic also hit the number of international raiders with just two in the field.

Incentivise was unbeaten in his previous nine starts, a run that started in relative obscurity under part-owner, breeder and former trainer Steve Tregea and continued through to the Caulfield Cup, a victory that thrust Peter Moody’s horse into clear favouritism.

The former trainer of Black Caviar remains without a Melbourne Cup.

Last year’s winner Twilight Payment, trained in Ireland, and the UK stayer Spanish Mission were the only two international horses in a field affected by the pandemic.

The seven-year-old Verry Elleegant – known as ‘Ellie’ to her connections – is the reigning horse of the year and has a Caulfield Cup among her nine group 1 victories before Tuesday.

“I have had so much success on her and she has been good to me, good for her connections and Chris [Waller], and I want to make this her biggest day in the twilight of her career,” McDonald said before the race

McDonald, known as J-Mac, has ridden 10 of Verry Elleegant’s 15 wins but missed the ride on her in last year’s Melbourne Cup, because he couldn’t commit to the entire campaign.

“She got a long way back and was as strong as anything at the end of the Cup last year,” McDonald said. “She is a fighter and she will run the trip out, I have no doubt about that.

“The only negative I can see is the 57kg, but there is a long tail to this field and I can’t see any other horse in this field, apart from the favourite, that could have run third in the Cox Plate.

Waller had waited until Saturday to decide to run Verry Elleegant and said if there was “any negative’ he would not have elected to do so.

He has rewritten all the record books on his way to the top but a Melbourne Cup triumph ranks as the sweetest moment since confirming his arrival among the best in the business.

Waller has won the past 11 Sydney trainers’ premierships, trained a horse of a lifetime in Winx and is setting standards that only he is likely to match.

“She travelled so sweetly in the run for such a big way.

“She is trained by a master. He gets them right. She is a superstar and I’m so proud of her.”

Incentivise was near the front from the start and took over from Persan with 800m to travel. But just as he hit the front, McDonald drove past Brett Prebble and charged away to win by four lengths.

Spanish Mission loomedg ominously before taking the minor placing. Floating Artist was the best of the Ciaron Maher-David Eustace runners in finishing fourth with the New Zealand-trained The Chosen One finishing fifth.

Verry Elleegant’s stablemate Ocean Billy was last of the 23 runners.