2016 Cox Plate: Winx, Hartnell and the dreams of the racing public

The Cox Plate is at the top of Australian racing. The best racing the best over 2040m, at weight for age and at Moonee Valley.

The distance, weight scale and track all serve to make the Cox Plate the weight-for-age championship of Australasia.

2040m is the best distance to establish who has the most perfect balance of stamina and speed. Too dour and you won’t keep up when the race gets serious. Too fast and you will get tired in the final stretch.

Weight-for-age is the championship scale. Tried and tested for centuries, it provides the most level playing field possible.

Moonee Valley is the perfect shape for a racing dual. Enough turns to force wide horses into going forward and injecting speed into the race, the long side straight and cambered turn give the back-markers a chance to wind up and the short 200m home stretch helps the weary leaders.

What better race than the Cox Plate to determine the WFA champion? This year’s Cox Plate, more than any other in the last decade or more, will determine Australian racing’s superior animal.

Winx or Hartnell? The reigning champion of Australian racing, and the Cox Plate, against the challenger in the mightiest of form.

If the Cox Plate was decided on career performances, Winx, an eight time Group 1 winner, would undoubtedly be the winner. But on recent performances, which are at least equally relevant, Hartnell is firmly in the conversation.

For a champion like Winx, improving the public’s opinion is not easy.

Dominating WFA races is the mark of a champion. And that she has done, winning six times at the scale since breaking the Moonee Valley track record in the Cox Plate 12 months ago.

Carrying weight to win a big handicap like the Doncaster, as she did in April, is sort of thing that separates a champion from other greats of the past.

And winning a second Cox Plate would be an important box to tick for a mare like Winx because it sends her level with 13 others. It is essential for her legacy.

But if Winx were to destroy a serious challenger to her dominance like Hartnell she would earn more respect and accolades than ever before. To do it in a Cox Plate is legendary.

Hartnell has a rare opportunity. In incredible form, the toppling of Winx would catapult him to the top of Australian racing.

There’s a lot more to be won than the Cox Plate on Saturday.

We know Hartnell is good. The imported six-year-old won The BMW at Group 1 level in 2015 in his first Australian preparation. He then ran fourth as an odds-on favourite in the Sydney Cup, pulling up lame after taking up an unfamiliar pace-making role.

The 2015 spring didn’t go to plan. Hartnell acquitted himself fairly but without the same autumn spark. Ten lengths separated him from Winx in the Cox Plate.

This autumn, a curbed hock ruined his campaign after one run, which was a five length defeat to Winx. The injury threatened to end his career. But the bay gelding recovered sufficiently to press on for another season.

Returning this spring off only one trial, six-year-old Hartnell was easily accounted for by Winx in the Warwick Stakes at Randwick over 1400m. Encouragingly, he beat the rest of the field easily.

The Warwick Stakes took Winx’s record over Hartnell to 3-0 by a combined margin of 17.45 lengths. But Winx has not yet met Hartnell in scintillating form.

After the Warwick, Hartnell then won a lacklustre Chelmsford by eight lengths to recapture his best form. The Hill followed by six.

Then came the Group 1 Turnbull at Flemington. Hartnell hadn’t yet fired in Melbourne but was favourite off the back of his incredible Sydney form.

Hartnell waltzed in at Flemington. Covering the turf like Black Caviar, as he has done in victory this preparation, Hartnell once again showed the sort of form that now sees him ranked tenth in the world. Winx is fourth.

Second in the Turnbull, with three kilos less on her back (the difference would be two kilos at weight for age) and three lengths back, was Jameka.

Jameka, of course, pulled her head off around Caulfield before winning the Cup in a canter on Saturday. It made Hartnell look every bit the world number ten. 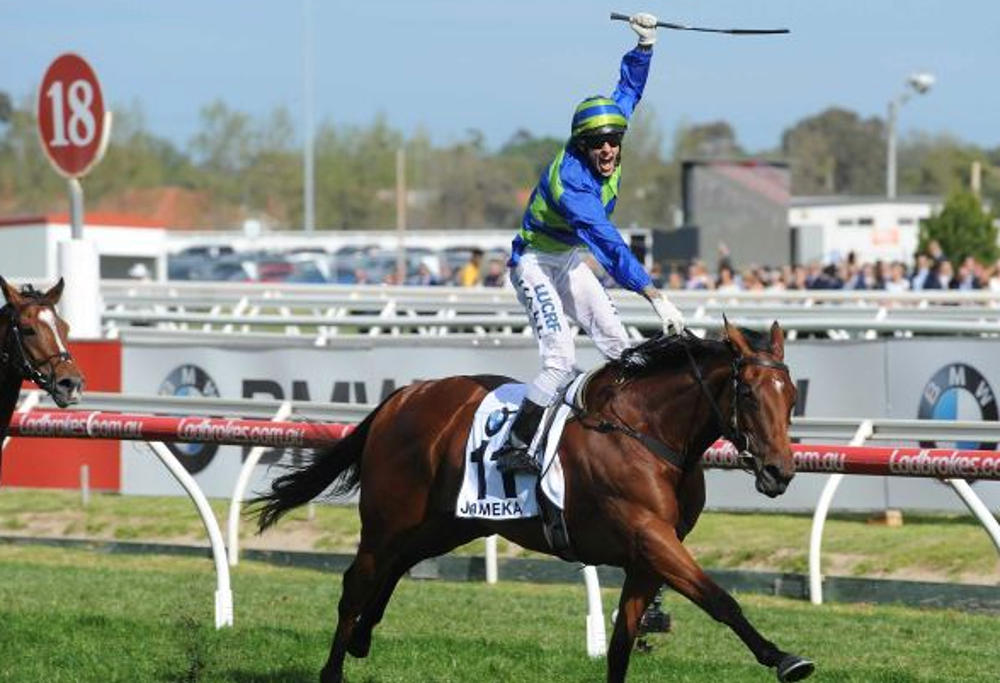 The Cox Plate is about two horses this year but several more star gallopers round out the field.

Hauraki, Hartnell’s stablemate, ran Winx to a bit over a length in the George Main last month, then like a good horse won the Epsom Handicap with an imposing 57kgs, coming from near last. The form around Winx goes okay too!

Yankee Rose, a rare filly in the Cox Plate, is a multiple Group 1 winner, including a commanding display at her last start in the Spring Champion over 2000m. She showed her class when running an eye-catching and narrow second in the Golden Slipper in March. She’s worthy of her place.

Black Heart Bart has won two Group 1s this spring against much lesser opposition but he did run Winx to two lengths in the three-horse Caulfield Stakes. He also ran a top second in the Newmarket Handicap over 1200m. In nine 2016 outings he has won four times and been second the other five. It takes special talent to do what he has done this year.

And then there’s French raider Vadamos, ranked 23 in the world, who won September’s Group 1 Prix du Moulin in Paris over a mile. That race’s honour roll includes superstars Rock of Gibraltar, Starcraft, Goldikova, Excelebration and Moonlight Cloud. Don’t let anyone tell you that the distance is too far because Vadamos is one of only three in the field to have won at 2400m.

If the race develops into the two-horse war the racing public dreams about then tactics are sure to play their part.

James McDonald will ride Hartnell and he has declared his hand. If Hartnell is to win the Cox Plate then McDonald has said he needs to be ahead of Winx at the half mile.

From barrier seven, McDonald will give Hartnell time find his feet at the start before searching for cover a a pair or two off the lead and one horse off the rails.

Hugh Bowman, Winx’s jockey, has always ridden the mare with initiative and courage. Bowman says he won’t be worrying about Hartnell too much or any slow pace. Even so, expect Bowman to ride a tactially-aware race, as per usual.

Winx has drawn barrier three and that golden marble will not be wasted. Bowman won’t bustle Winx early, he never does, but if the pace is slow enough early to allow Winx to race next to, or in front of Hartnell, Bowman won’t relinquish the positional advantage by choice.

Hartnell appears sharper than Winx this preparation so if I were Bowman I would not be adverse to the idea of being the architect of an early move. Cox Plates often get interesting at the 800m mark. Wouldn’t it be something if Winx and Bowman landed the first punch?

For McDonald, the aim will surely be to have Hartnell mobile off the top turn, out in clean air and ready to pounce 900m from home.

Hopefully the way the race unfolds allows us to see Hartnell and Winx match their motors. It will be a race to behold.

My money is on Hartnell. If he brings his recent form, I doubt there is a horse currently racing in the world that can beat him.

It is often said that the Cox Plate is the best two minutes in sport every year. Whatever happens this year, it may well be true.