The Group 1 Prix de l’Arc de Triomphe (approximately 2400m) in France on Sunday (1:05am Monday morning) will again highlight the best horses in the world over 2400m.

The race is meant to be having one of its down or quieter years, but this year looks like it could be the start of a dynasty for the filly Enable.

I’ll stop short of declaring her – the race is running at Chantilly for the second year while Longchamp is under renovation, and the track is a little tricky, with sharp bends. That can play havoc with big fields and Enable won’t have it all her own way.

There is some rain around and temperatures aren’t hot, so there should be some cut in the track. Early forecasts were for downpours but that has shifted towards only a little rain.

The 18 starters in the weight-for-age conditions.

1. Zarak – Trainer: Alain De Royer Dupre – Jockey: Christophe Soumillon
Has a nice link to the race, being out of the 2008 winner, Zarkava. Hasn’t raced since first Group 1 triumph in the Grand Prix de Saint-Cloud in July, after a forget run when last. Was unlucky behind Cloth of Stars in Prix Ganay who’s in this race as well.

Kept reasonably safe in betting but would need to go to another level. Drawn widest in 18 but not such a disadvantage.

2. Doha Dream – Trainer: Andre Fabre, France – Jockey: Gregory Benoist
On last year’s form would be a genuine chance, but finished behind Melbourne Cup hope Tiberian twice in lesser grade races at Deauville than this. Outclassed and would be a big surprise.

3. One Foot In Heaven – Trainer: Alain De Royer Dupre – Jockey: James Doyle
Ran here last year behind Found when sixth, beating his odds. Again long odds and probably fairly so. Was a decent second in a Group 3 at Maisons-Laffitte but Seventh Heaven beat him comfortably earlier in the year at Newmarket and little chance of a turnaround.

4. Ulysses – Trainer: Sir Michael Stoute – Jockey: Jim Crowley
Top chance in the race, and getting better as he goes on. Won the Juddmonte International Stakes, beating Churchill. Enable had the better of him in the King George but that was on soft ground. He seems to be going better than ever so no doubt holds as one of the favourites behind Enable. Draw doesn’t look like it will suit him.

5. Cloth Of Stars – Trainer: Andre Fabre – Jockey: Mickael Barzalona
Beat Zarak in the Prix Ganay at Saint-Cloud by a short neck and given a break from that into the Prix Foy, with a second to German horse Dschingis Secret. Given this race is over this track and distance, would surprise to turn the table on him. 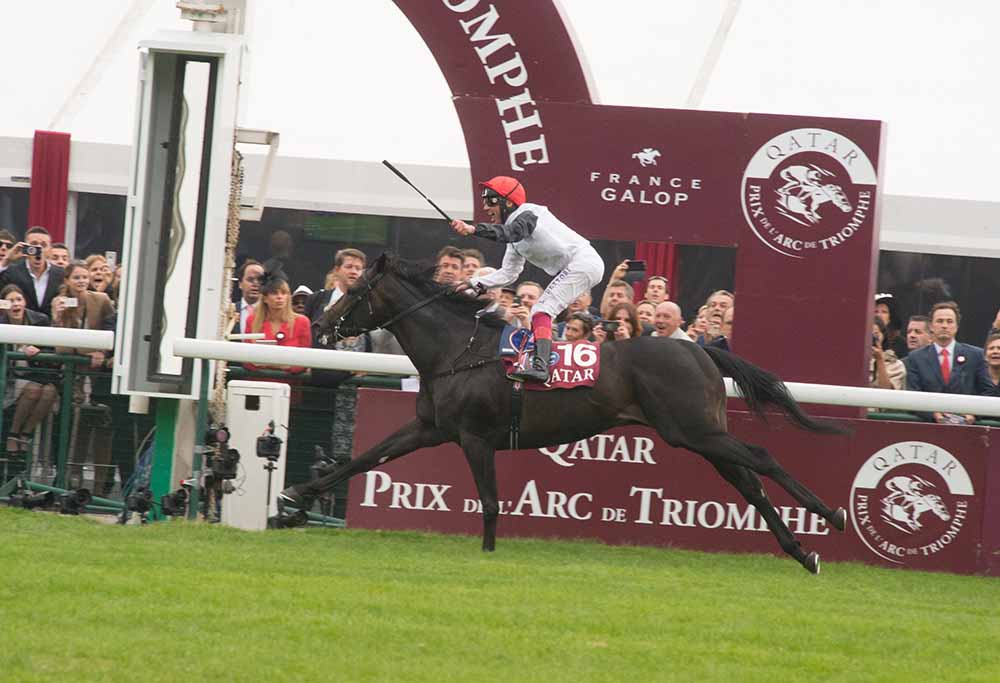 6. Silverwave – Trainer: Pascal Bary – Jockey: Pierre-Charles Boudot
Third attempt in the Arc which is quite a special record but hasn’t really been close with a 10th and 13th in succession. Didn’t do enough to say he’ll be better after running behind both Cloth Of Stars and Zarak in the Grand Prix de Saint-Cloud. No thanks.

7. Idaho – Trainer: Aidan O’Brien – Jockey: Seamie Heffernan
Australians will remember Aidan O’Brien nearly brought across Idaho, the full brother to Highland Reel, last year for our big races but lost his rider in the St Leger which put everything out of whack.

This year he won the Group 2 Hardwicke Stakes and was a credible third behind Enable and Ulysses in the King George. Dropped away from those highs with a poor run at Saratoga. At his best could place chance.

8. Dschingis Secret – Trainer: Markus Klug – Jockey: Adie de Vries
The main German chance out of the two in the race, and has a nice winning steak behind him, winning five out of his last six including four this year at Group level. Quite fancy his chances to go on with it as a top place chance.

9. Satono Diamond – Trainer: Yasutoshi Ikee (Japan) – Jockey: Christophe-Patrice Lemaire
First of the Japanese raiders who can boast wins in races like the Arima Kinen. Only managed a fourth place in the Prix Foy which offers plenty of formlines here but was first-up. Career best could offer a surprise.

10. Satono Noblesse – Trainer: Yasuotshi Ikee – Jockey: Yuga Kawada
No. Seems like only here as a stablemate companion to Satono Diamond and was a pacemaker in the Prix Foy.

11. Iquitos – Trainer: Hans-Jurgen Groschel – Jockey: Andrasch Starke
Another German horse but wasn’t up to Dschingis Secret at Hamburg in a Group 2. Did win last start in Munich at Group 1 level which was encouraging but would need to go up another level.

12. Order Of St George – Trainer: Aidan O’Brien – Jockey: Donnacha O’Brien
The horse that would’ve set the Melbourne Cup alight was kept in Europe for the Arc, even though we’re sure part-owner Lloyd Williams would’ve been keen to get him down here.

On his form he looks as well as ever. Absolutely bolted in to win the Irish St Leger for the second time by nine lengths and could’ve won by double that. As one of the best stayers in Europe he will need a fast tempo in the Arc which he might actually get. He was third here behind Found on a firm track last year and with some cut in the ground might elevate himself further. Another top-place chance.

13. Seventh Heaven – Trainer: Aidan O’Brien – Jockey: Pat Smullen
Wasn’t good last start first-up, but forgetting that run, won the Jockey Club Stakes at Newmarket in May although that race looks fairly weak. Did beat Found last year but that’s over a year ago now and not going as well?

14. Brametot – Trainer: Jean-Claude Rouget – Jockey: Cristian Demuro
Had put together four straight wins in three-year-old, including two classics but had an issue last start so forget that run. Has a real turn of foot which might suit, but up to the 2400m his price looks unders given he’s rising to his hardest open-class test and distance. I’d have to risk him.

15. Capri – Trainer: Aidan O’Brien- Jockey: Wayne Lordan
Interesting runner having shown something all year long and is tough. Won the Irish Derby and then the English St Leger at Doncaster to come into this race in hot form. No horse has managed the St Leger-Arc double in a single year so it looks hard. Has won on heavy ground.

16. Plumatic – Trainer: Andre Fabre – Jockey: Maxime Guyon
If you said this horse only had a maiden win to his name from four starts you’d be accurate, but marking harshly. Was only beaten a nose in the Prix du Prince d’Orange at Maisons-Laffitte last start, but was thrashed by Brametot the start before. Would be an incredible shock but Fabre is a genius.

17. Enable – Trainer: John Gosden – Jockey: Frankie Dettori
The hot favourite and has put together a heck of a season thus far. Winning this would cap off a world beating run.

She beat the best challenger in Ulysses by a wide margin in the King George VI and the Queen Elizabeth Stakes at Ascot in July. Smashed the fillies in the Yorkshire Oaks last start.

Are there any chinks in her armour? Well, she has been in training since April which is a good stretch, although was freshened into her Oaks win last start. Dettori has said he’d prefer to lead with her and the draw favours her to do this but they might want to not let her.

She has faced the best of the open-class horses and beaten them, but this is the biggest and best field by far. Should be wonderful to find out how good she is. Would prefer a firm track.

18. Winter – Trainer: Aidan O’Brien – Jockey: Ryan Moore
The other flying filly in the race and a dual-Guineas winner. Won four on the trot before a second last start by a head at Leopardstown. The issue for her is that this is 400m further than she has contested before and that will be testing given her pedigree shows her dam was a sprinter. Ryan Moore chose to ride the filly over O’Brien’s other hopes so that is telling, and she is classy.