After one of the more forgetful Super Bowls in recent times, the crazy NFL off-season – if there is such a thing – is upon us. Which can only mean one thing.

Mock draft after pointless mock draft will be sure to take up plenty of media space in the lead up to the 2019 NFL Draft on April 26 (AEST).

For many, the mock draft below will be the first introduction to the 2019 draft class, so here’s a quick snapshot: it’s good news for teams who need help up front on defence, particularly on the edges, with most of the top ten picks likely to come from that side of the ball.

The quarterback and wide receiver groups are deep, if lacking in top end talent, while it’s not great news for teams needing help along the offensive line or in the secondary – primarily at cornerback.

With that, here’s a first look at how Round 1 could shake out. It’s worth keeping in mind that much will change between now and the draft, with free agency and the trade period likely to alter team needs and the overall order dramatically.

Who will be the new Tom Brady? Will there ever be anyone like him again? (AP Photo/Steven Senne)

1. Arizona – Nick Bosa – Pass Rusher, Ohio State
Truthfully, I suspect somebody else will own this pick come draft night, be it a trade for a quarterback or Ohio State pass rusher Nick Bosa. Arizona know they need to accumulate picks to kick-start this rebuild in the desert. Bosa would be quite a fall-back option.

2. San Francisco – Josh Allen – Pass Rusher, Kentucky
Allen finished with 14 sacks this season, and was the standout for a Kentucky football team that had the schools best season in three and a half decades. Allen (6”5’ and 260 pounds) is a well-rounded, versatile pass-rusher with a high ceiling.

3. New York Jets – Jonah Williams – Offensive lineman
In a Draft loaded with defensive talent, the Jets know their utmost priority is to help Sam Darnold on offense. There’s conjecture as to whether Williams is a guard or a tackle, but he is as sound an offensive line prospect as you will find, and has the potential to start at any of the five positions in front of Darnold next season.

4. Oakland – Montez Sweat – Pass Rusher, Mississippi State
Nobody made themselves more money during the Senior Bowl than Sweat. A long, muscular pass rusher at 6”6’ and 250 pounds, Sweat would add some heat off the edge for a Raiders team that finished dead last in sacks last season with 13.

5. Tampa Bay – Clelin Ferrell – Defensive End, Clemson
Ferrell is not a prototypical pass rusher. He sets a strong edge and can get after the quarterback when need be, and would be a nice complement opposite Jason Pierre-Paul on the edge. A defensive line of JPP, Gerald McCoy, Vita Vea and Ferrell is one to be feared.

7. Jacksonville – Dwayne Haskins – Quarterback, Ohio State
Here’s a franchise I can see reaching for a quarterback. The Jags have needed to fix this position for a while, so don’t be surprised if they double dip through free agency and the draft.

8. Detroit – Rashan Gary – Defensive linemen, Michigan
Gary is the enigma of this draft class. A physical specimen, Gary’s production at Michigan didn’t come close to matching his potential, and that’s what the local product will be drafted on.

9. Buffalo – DK Metcalf – Wide receiver, Ole Miss
The Bills are another team that will be looking to surround their young signal caller with weapons. Metcalf’s redshirt sophomore season at Ole Miss was cut short due to a serious neck injury, but the 6”3’, 225-pound receiver that runs like the wind should be the first wide receiver off the board if his health checks out.

10. Denver – Drew Lock – Quarterback, Missouri
General manager John Elway is going to keep swinging on quarterbacks until one sticks. Lock is big (6”4’, 225 pounds) with a flamethrower of an arm. However, Lock’s accuracy and decision-making issues have earned him comparisons to Jay Cutler, whom the Broncos ironically drafted with pick 11 in 2006.

11. Cincinnati – Dalton Risner – Right Tackle, Kansas State
A boring pick for a boring player that impressed mightily at the Senior Bowl. Risner has the look of an All-Pro right tackle, yet also brings versatility as a guard prospect. The Bengals need to get tougher in the trenches and Risner is tough and then some.

12. Green Bay – Jachai Polite – Pass Rusher, Florida
Aaron Rodgers needs help on offense, but the defence is even more desperate for some juice. Polite has the quickest first step of all the pass rushers in this draft, and would be a welcome addition to a sagging defence.

13. Miami – Ed Oliver – Defensive Tackle, Houston
The Dolphins need a quarterback, but that may be a void they look to fill in free agency after inevitably cutting bait with Ryan Tannehill. Oliver may not slide this far on draft night, but if he does, expect new head coach Brian Flores to welcome him to South Beach with open arms.

14. Atlanta – Dexter Lawrence – Defensive Tackle, Clemson
Atlanta need reinforcements up front on defence, especially if they can’t re-sign defensive tackle Grady Jarrett. Lawrence is a behemoth in the middle that would continue the Falcons love affair with Clemson prospects.

15. Washington – Daniel Jones – Quarterback, Duke
The situation with Alex Smith is an unfortunate one, but I suspect the Redskins will move on in 2019 with a new quarterback. Jones is a tall prospect at 6”6’ whom some scouts around the league believe could be the first quarterback off the board come April’s draft.

16. Carolina – Andre Dillard – Left tackle, Washington State
Carolina have plenty of needs on a roster that has slowly eroded since the teams appearance in Super Bowl 50. They’ve long needed offensive line help, and they’d get it here with Dillard, the most athletic and natural left tackle in the draft.

17. Cleveland – N’Keal Harry – Wide receiver, Arizona State
It is rather strange seeing the Browns pick this “late” in the draft and with so little glaring needs. They do lack a true number one wide receiver on the perimeter, and Harry would fit the bill with his freakish size/speed combination.

How are your NFL tips faring this season? (Photo by Brett Carlsen/Getty Images)

18. Minnesota – Cody Ford – Offensive lineman, Oklahoma
Ford is a nasty, technically sound right tackle prospect that may move to guard in the pros. The Vikings won’t mind where he ends up, as they need help all along the front five.

19. Tennessee – Marquise Brown – Wide receiver, Oklahoma
Marcus Mariota and his Titans need something to help take this offense to the next level. Marquis ‘Hollywood’ Brown is a smaller, lightning fast receiver capable of having a Tyreek Hill-like impact on offense.

20. Pittsburgh – Byron Murphy – Cornerback, Washington
The Steelers must improve their secondary via the draft this year, particularly at cornerback. Murphy is the next twitchy, ball hawking yet slightly undersized prospect to come out of a school quickly earning a reputation as “DB U”.

21. Seattle – Greedy Williams – Cornerback, LSU
Seattle love trading back in Round 1, but not when a talent like Williams falls to them. The Seahawks also love long, rangy cornerbacks, however Williams’ light frame and reluctance to get physical means he won’t suit everyone, and thus has potential to slide in this draft. 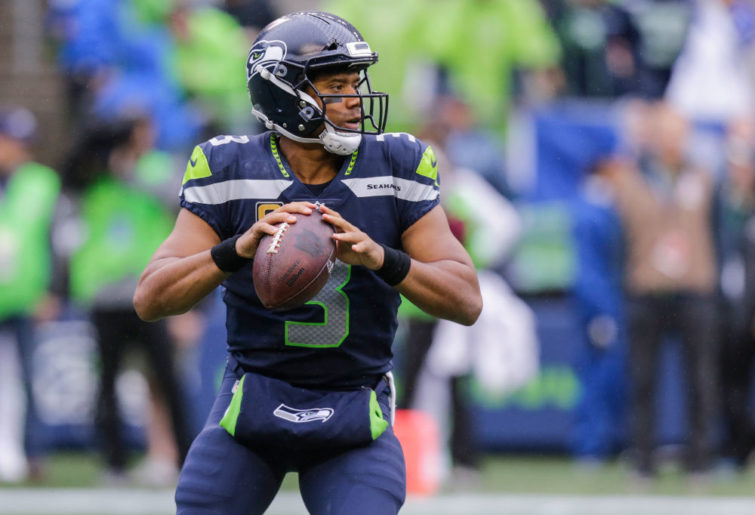 Quarterback Russell Wilson – does he need some Greedy? (Photo by Stephen Brashear/Getty Images)

22. Baltimore – Jaylon Ferguson – Pass Rusher, Louisiana Tech
Ferguson left college with the most sacks in Division 1 with 45, breaking the previous record set by current Ravens pass rusher Terrell Suggs (44). This pick could be a changing of the guard for a defence that could look very different in 2019.

23. Houston – Greg Little – Offensive tackle, Ole Miss
The Texans know their main off-season priority is to strengthen their porous protection for quarterback DeShaun Watson. Little is green, but has all the tools to be developed into one of the league’s better blindside protectors.

24. Oakland – Devin White – Linebacker, LSU
Oakland have needed a linebacker like White for a very long time. He can miss some plays due to his tenacity, but adding him this late in the first round along with Sweat would be a great start to a defensive front seven that is otherwise rather tame.

25. Philadelphia – Zach Allen – Defensive End, Boston College
Salary cap constraints mean Philly may be forced to say goodbye to some of their defensive line troops. Allen is a tough edge defender who can move inside on third downs, and his demeanour would marry well with the city of Philadelphia.

27. Oakland – Deionta Thompson – Safety, Alabama
defence again. Thompson is a pure free safety that comes without the ball production you would expect from an Alabama defensive back. I’d also expect Jon Gruden to kick the tyres on Oklahoma quarterback Kyler Murray here if the situation arose.

28. Los Angeles Chargers – Christian Wilkins – Defensive tackle, Clemson
The Chargers have one of the best rosters in the NFL, however they are still lacking a true difference maker in the middle of the defence. Don’t let the fact Wilkins is the third player picked from Clemson’s stacked defensive line fool you, he has the look of a perennial Pro Bowl DT.

29. Kansas City – DeAndre Baker – Cornerback, Georgia
The Chiefs will be a hot Super Bowl tip if they can just improve their next to last defence from 2018. Baker, a sticky, man-to-man cornerback would no doubt help a fledgling secondary, and would represent enormous value at pick 29.

30. Green Bay – TJ Hockenson – Tight End, Iowa
Help for Rodgers on offense, this time with a true field stretching tight end. Hockenson hails from the same school as 2018 All-Pro tight end George Kittle, and his game isn’t too dissimilar to the 9ers star.

31. Los Angeles Rams – Brian Burns – Pass Rusher, Florida State
The Rams are another team that look likely to be filling some holes this off-season, starting with a perimeter pass rusher. Burns only has a light frame (235 pounds) and will have to add size to excel in the NFL, but he has natural strength. With more weight, Burns could evolve into a double-digit sack master.

32. New England – Kyler Murray – Quarterback, Oklahoma
Champions again, and it’s almost impossible to predict what Bill Belichick will do in Round 1 each year. It’s doubtful Murray will last this long, but if in reality he did, the Patriots would surely be interested. Contrary to popular belief, Murray looks to make plays with his arm first, before improvising with his legs. 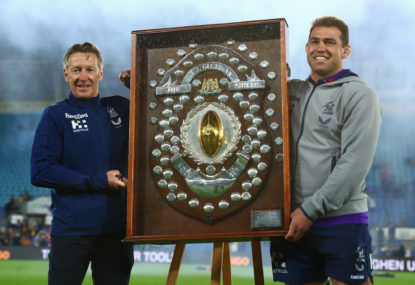 For NFL Week 14, I will analyse five games I think are the best predictions and back it up with my reasoning and strategies…