Punters treated to a mini version of The Everest this Saturday

How bloody good is this September shaping up to be?

We’ve got footy finals, The Ashes, the basketball and rugby World Cups, the start of the NFL season and some terrific spring racing.

Punters have been given an early treat this Saturday in the form of the Group 3 Concorde Stakes.

This 1000m dash isn’t always a must-watch event, but it will be this time around.

Basically, it’s a mini preview of The Everest. The $13 million race is still six weeks away, but all six horses in the Concorde on Saturday will be making a case to contend in the feature.

I’ve decided to preview the race below as I think it is still a reasonable betting race if you are happy to look for value in the small field.

As a punter, it would be lovely to see the sun come out in Sydney over the next month. Every time there’s good racing in the Harbour City, the rain seems to fall.

One thing I’m looking forward to is the Australian debut of a certain Kiwi, known best as “The Shark”.

He’s going around as favourite on Saturday and you can read my thoughts on him below.

We’re in for a salivating September.

Race 6 at 3.10pm – $160,000 Group 3 Concorde Stakes (1000m)
Six classy runners go around for the first time this preparation. The speedy Nature Strip opened up favourite and he is probably the most likely considering he’s the fastest horse in the country over 1000m. However, since arriving at Chris Waller’s yard there has been an effort to teach the horse to settle in his races.

That’s concerning as I think he’s a pure speed horse. Based on the fact there are a number of horses capable of leading, including Zoustyle and Sunlight, I’m leaning towards a value runner.

The Kris Lees-trained Graff needs to win on Saturday to put himself into contention for The Everest. He’s trialled well in the lead-up to this race and has drawn barrier one, which could be a blessing or a curse. I’m hoping it’s the former.

Graff should be able to stalk the speed and if Brenton Avdulla can find a way through in the straight he might be able to finish over the top. At $7 I think he’s the value in the race.

Race 7 at 3.50pm – $250,000 Group 2 Chelmsford Stakes (1600m)
Avilius was set an impossible task first-up a fortnight ago, but he’ll be winning tomorrow. A bigger field and more speed should ensure a genuine tempo and that’s all this gelding needs to run over the top of them. Value punters might want to consider Angel of Truth for the exotics.

Race 8 at 4.30pm – $200,00 Group 2 Tramway Stakes (1400m)
All eyes will be on boom horse Te Akau Shark, who makes his Australian debut. The Kiwi star is a serious horse. The way he finishes a race is something to see. However, he’s far too short on Saturday.

The reason why I wouldn’t want to back him just yet is because this is his first time racing across the ditch, so we have no idea how much he has acclimatised. The other reason he is worth taking on is that he gets so far back in his races.

He might finish like a steam train, but he’s going to give some good horses a head start. A horse like Dreamforce could be the danger. Nash Rawiller is going to take him to the front and the tough gelding is going to kick hard in the straight. His first-up record is sound and he loves the 1400m.

Dreamforce came off placings in the George Ryder and Doncaster in the autumn and won a trial heading into this. He’s the each-way value. I kind of want to watch the Shark run them all down, but my head says he’s not a good betting prospect.

Race 6 at 3.30pm – $140,000 Listed Bendigo Bank Stakes (1200m)
Tasmanian raider The Inevitable has never been to Moonee Valley before, but I think he’s going to enjoy it. The Scott Brunton-trained gelding has tactical speed from the barriers and Craig Williams should be able to use it to find a spot just off the speed on Saturday. 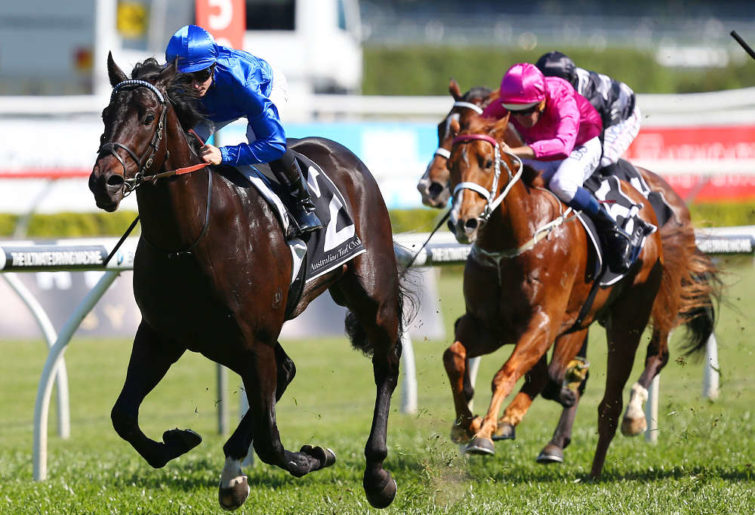 An impressive sit-sprint horse, The Inevitable might be an attractive prospect this spring. He won the Tasmanian Guineas in the summer before heading to Victoria with a win in a Group 3 at Flemington. Thrown in the deep end to race in the Group 1 Australian Guineas in March, he was eighth of 16, beaten seven lengths.

But the winner Mystic Journey put a gap on the field that day, so the performance was credible. I think The Inevitable is more of a sprinting type, so he’ll be in his comfort zone on Saturday.

Suggested bet: The Inevitable (10) to win.

Race 8 at 4.50pm – $250,000 Group 2 Feehan Stakes (1600m)
A pretty good Group 2 race assembled here and for good reason – the winner gets a guaranteed start in the Cox Plate. It looks to be a race with plenty of value so I’m looking at a country horse whose trainer has had success in this race before.

Paul Preusker produced an upset in this race last year, so he can do it again with Surprise Baby. The Horsham-trained gelding probably wants it further, but he’s won over a mile before (at this track) and is going have residual fitness from his winter campaign. Jockey Jordan Childs will probably go back on him at the start, so he’ll need a little bit of luck, but he’s a quality horse and there’s plenty on the line.

You could get $14 about Surprise Baby on Friday morning and I’m confident he’ll still be around that mark when the jump on Saturday arvo. There are probably ten winning chances in this race so go wide in the quaddie.