Houston gave up on convention, mainly out of necessity, when they traded Clint Capela and more for Robert Covington. Since then, and for a while before then while Capela was hurt, the Rockets have effectively played with no one over 201cm.

P.J. Tucker, their starting centre, is the same height as Jamal Crawford.

The Rockets made the move because they had to do something. In their Capela-iteration they were going nowhere – maybe the third-best team in the West, maybe the sixth-best, it didn’t really matter.

Now, they have a puncher’s chance and a pathway, but only via revolution.

Small-ball is the answer to a lot of basketball’s questions and the league has trended smaller and smaller ever since playing LeBron James at the four unlocked Miami’s first title. But no team has committed to playing small all the time like the Rockets are now.

With shooting all around him and all that space, Russell Westbrook looks five years younger. Once again he looks like a force, picking up steam and playing in a dream-state of constant transition while opponents drift into the half-court world.

The Rockets’ new look allows Westbrook to be a 190cm-tall Giannis Antetokounmpo.

James Harden feasts on the space too. While he loses some lobs, he’ll waltz to more uncontested layups than ever before. Before, a wrong-footing of his defender led to an off-balance defence – now it leads to an unimpeded path to the hoop. 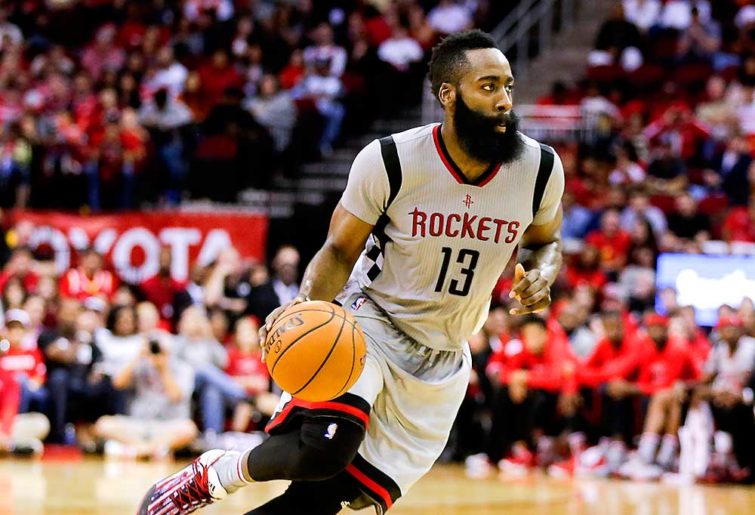 The questions are on the other end. For stretches, being small looks like a mind trick that works. The Rockets are quicker and more opportunistic now.

When they played Utah, Rudy Gobert’s size looked comical with Harden often his primary defender. But the Jazz’s offence became disjointed by the compulsion to take advantage of Gobert’s size, trying too hard to feed him, losing seconds off the shot clock and tossing the ball up to get picked off.

Eventually, though, something clicked. Jordan Clarkson and Mike Conley realised they could get to the rim whenever they wanted. Any time they got downhill it was over. The two main shot-blocking presences on the team are Harden and Covington.

The Warriors’ famously small death line-up didn’t have traditional height but it had crazy length and intelligence. The Rockets compete, but Covington and Tucker are their only special defenders. They don’t have the death line-up’s length.

The 2018 Rockets, who also played Tucker at centre, had Chris Paul, one of the best perimetre defenders in the game, in place of the spacey and inconsistent Westbrook.

Whatever the Rockets end up being, the path there will be compelling. The regular season quickly becomes a tired exercise, and if nothing else, seeing a team allow Jordan Clarkson to be a presence on the offensive glass is something to behold.