With most of the East Coast of the US snowed under, it’s comforting to know the Superbowl weather will not be like that – but it will still be bloody cold.

Breathing in the Mercedes Atlanta stadium will be fraught with endless possibilities, for both the public and players alike.

Unlike here in winter, we don’t get all rugged up, save for one or two players that really feel the cold… and put on a long sleeve jumper. Helmets, thermal underwear, padding and whatever else they can wear to keep them warm.

With the temperatures dropping from around eight to four degrees during the game, a couple of cold affected thoughts come to mind.

The surface will be extremely slippery and the running backs and wide receivers will have their work cut out for them as the night progresses.

Throwing and catching the ball has its own complications as well, once it gets wet from the dew on the ground will make throwing the ball slightly heavier as the game goes on.

So experience has the determining factor here so the New England Patriots should walk away with this one, 22-8.

The Chattahoochee River divides Georgia into separate climatic regions, with the mountain region to the northwest being cooler than the rest of the state.

The average temperature for February on this night is exactly that – average.

But Atlanta’s winter weather can be highly variable. It’s not uncommon for a night in February to get colder than 5 °C.

Overall, freezing temperatures happen during 36 nights a year on average, from November to March.

Winter for Atlanta is much warmer and slightly drier than normal this year, with below-normal snowfall.

That’s lucky for the spectacle of the game, unlike previous weeks where games have been played in snowbound conditions.

I’m not expecting any rain or snow on the night, and with light winds the weather shouldn’t have a role to play.

The first blockbuster trade of the 2021 NFL season has just taken place between the Detroit Lions and the Los Angeles Rams.

A dour and at times ugly Super Bowl has seen the New England Patriots defeat the Los Angeles Rams by ten points at the Mercedez-Benz Arena in Atlanta, with Tom Brady winning his sixth.

The 53rd Super Bowl will be played between the Los Angeles Rams and New England Patriots at the Mercedes-Benz Stadium in Atlanta, Georgia. Kick-off is scheduled for 10:30am (AEDT) on Monday, February 4.

Super Bowl 53 will see the New England Patriots attempt to win yet another NFL crown when they take on the Los Angeles Rams. 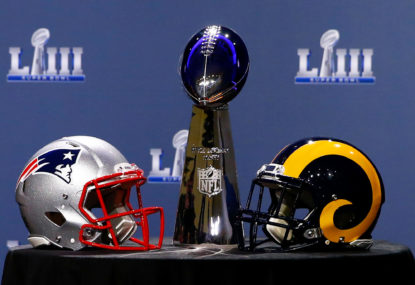