In an era of unexpected premierships, West Coast’s 2018 flag wasn’t as storied as the Western Bulldogs in 2016 or Richmond in 2017.

The Eagles had played off in the grand final only three years earlier, but they had to overcome a number of burdens all the same.

Andrew Gaff was having his most outstanding season yet, and was on track for the best and fairest, but missed the last three rounds and the entire finals series due to suspension. Nic Naitanui had gone down with an ACL only two weeks earlier, and this was not long after they had stumbled out of the mid-season bye with three losses in a row.

But West Coast put it all behind them with a superb finals series. A fighting win at home over the Pies where they had to lift late to put the game away; a stunning pulverisation of Melbourne in the prelim – and of course coming back from five goals down against Collingwood in the grand final.

The Dogs haven’t made the finals since their flag. Richmond got better after their premiership and finished on top, but failed on the penultimate weekend. How will West Coast fare as the reigning champ?

Nic Naitanui was not considered for the above, given he is expected to miss at least 3-4 months on his return from injury, but would obviously come straight into the side. With Scott Lycett moving to Port in the off-season, the ruck division at the Eagles will look very different.

Nathan Vardy will lead the ruck in Naitanui’s absence, as he did in 2017 when he performed serviceably. Tom Hickey has been brought in from St Kilda as support, and will likely play given Adam Simpson’s penchant for having two rucks in his side.

Vardy and Hickey will feed a midfield that looks more dangerous than ever given Dom Sheed’s emergence as genuine game-shaper in the finals series last year and Jack Redden coming off his best season.

Regardless of ruckmen, clearances are never going to be an issue when you have the hardness of Elliot Yeo and the explosiveness of Luke Shuey to complement Redden’s extraction skills. Yeo loves to drive the ball long into the West Coast tall forwards, and Shuey loves a goal from a centre square clearance – and the new rules should play perfectly into these strengths.

Sheed is an all-round contributor, and if his pre-season form is anything to go by he is ready to step into the league’s elite off that finals series. Andrew Gaff has gradually gotten better and better over the course of his career, becoming more rounded and damaging as time has gone on. 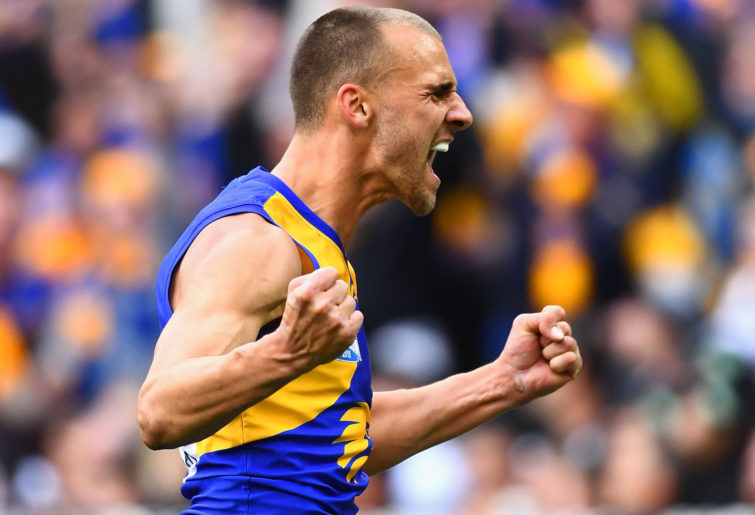 Dom Sheed of the Eagles celebrates kicking a goal during the 2018 AFL Grand Final match between the Collingwood Magpies and the West Coast Eagles at Melbourne Cricket Ground on September 29, 2018 in Melbourne, Australia. (Photo by Quinn Rooney/Getty Images)

Mark Hutching has enjoyed success as a tagger, and his hatchet job on Steele Sidebottom in the grand final will ensure he stays a West Coast favourite son for many years to come.

Jamie Cripps is another coming off an excellent season, finishing fourth in the best and fairest – his second half of the year was the best football he has produced, and in no small way covered for the loss of Gaff.

Up forward, Josh Kennedy and Jack Darling are part of what looks the best spine in the competition.

Kennedy is succumbing to more injuries as each year passes, and has produced diminishing returns in regards to games played in the last three seasons. Admittedly, his touch was outstanding each time he returned from missing matches last year, which was a credit to the man himself and the Eagles coaching staff.

Darling became a beast last season, the most dominant power forward in the comp in the first half of the year. His maturity was shown in the grand final when he had a horrible first half but was the key player on the ground in the third term.

That showed real character, especially as someone who was remembered for a less-than-stellar moment in the 2015 grand final against Hawthorn.

Liam Ryan and Willi Rioli were wonderful finds up forward, both averaging more than a goal a game in their debut seasons. Natural improvement can and must be expected from both of these players.

Jake Waterman and Oscar Allen look to be in competition for the third tall forward role, and Jack Petrucelle is seen to have the inside running on the pressure small forward position. With Kennedy ever in doubt with injury, Cripps facing a delayed start to the season, and the retirement of Mark LeCras, the West Coast forward-line will have a number of different looks about it this year.

Jeremy McGovern was rated the 12th best player in the league by The Roar Top 50, and some would have him higher still. While Alex Rance has been seen by most as the best key defender in the competition over the last five years, McGovern has claims to that mantle too. 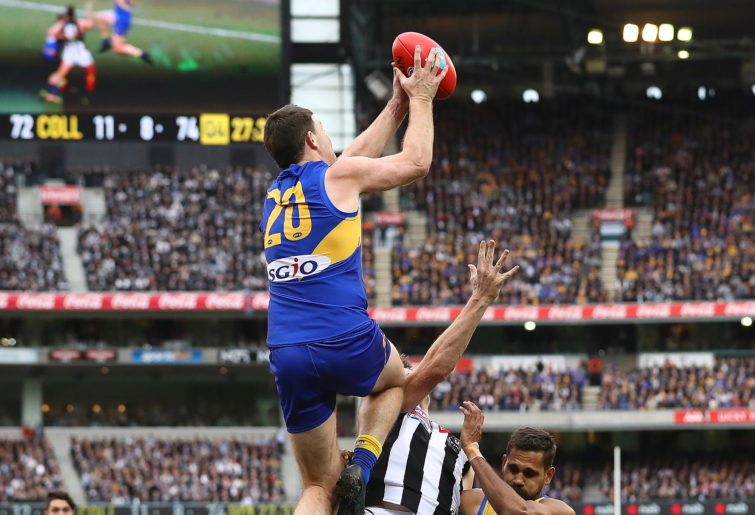 Between McGovern and Tom Barrass, who between them took almost 100 contested marks last year, it’s a tough ask to break them down. Backmen that can win their own ball in the air are a valuable commodity in the modern game.

And this is the strength of the Eagles backline, because it is not just McGovern and Barrass that back themselves in. Shannon Hurn is renowned for his piercing right foot, but is also a superb reader of the play. Brad Sheppard was the hard-luck story in missing the premiership through injury after playing 23 matches, but also backs himself in, and is a good kick.

Lewis Jetta’s kicking can be the most sublime in the league when he’s firing, and Tom Cole also delivers the ball well. Liam Duggan is improving every year, slots in well with the same set of skills as the others around him.

West Coast won their flag based off a kicking game, and a lot of it started in the back half thanks to their exceptional ball users – who turned defence into attack by winning the ball back themselves rather than having it handed to them.

The Eagles don’t have a huge amount of depth for a premiership side, although the three emergencies named above were part of the grand final team. They are only the eighth most experienced list for games played, which suggests they will gain more experience and continue to grow.

Hurn is the oldest player but is coming off an All-Australian year, while Kennedy is the second oldest and injuries are taking their toll, but he is still a powerful force when fit.

Looking at last year’s ladder at the end of the home and away rounds, West Coast only plays one top six side in the first eight weeks. They will certainly get their chance to build a platform from which to mount a flag defence.

It’s hard to see the Eagles defence breaking down and their attack is multi-dimensional, with both areas of the ground built around a strong key duo. The midfield has no obvious weakness, and they have proven they can cover injuries.

Add in a distinct home ground advantage and a game style that is made to resist the pressure game favoured by some rivals, it’s hard to see West Coast not challenging again.