After an absence of almost seven years, straight track racing returned to New South Wales on Saturday morning when Richmond conducted their inaugural meeting, and it proved to be a huge success.

The early start of 8:30am saw the pools on the early races quite low but had grown significantly by the time the running of race 12 occurred.

Since Appin held their final meeting at their straight track in late 2013, participants, and punters, have had to endure a long wait for the recommencement of straight racing.

For several years, the building of a new track was placed on the back burner, but the outstanding success of straight track racing in other states, together with benefits from a welfare point of view, finally saw Greyhound Racing New South Wales make the decision to build a straight track.

The track would be built alongside the existing greyhound track at Richmond, thus utilising existing infrastructure including race day kennels, judges’ box, and facilities for the public.

Murray Bridge in South Australia, Capalaba in Queensland, and Healesville in Victoria have all been racing twice a week, with full coverage by the TAB, for the last two years, with excellent support from trainers who often use a race up the straight as a trial when preparing their greyhound for racing on the circular tracks.

In 2019, the inaugural National Straight Track Championship involving the three states was held, with greyhounds progressing from heats and semi-finals in each state to a National final which was held at Healesville, with the winner collecting a healthy $25,000 pay cheque.

In 2021, we will see New South Wales greyhounds provided with an opportunity to compete in this series as the result of the Richmond track.

Much emphasis, and a mountain of money, has been placed on the welfare of greyhounds in recent years, with strict new welfare standards introduced in all racing states via Code of Practices which provide clearer guidelines on the keeping and racing of greyhounds for trainers.

The closure of tracks considered unsafe, the upgrading of racing facilities to ensure that all tracks were safer, and the closer monitoring and reporting of injuries sustained during a race, also transpired as a direct result of the codes implementation.

Most race day injuries occur on bends – the tighter the bend, the more risk of injury.

One-bend tracks, such as Maitland and Bulli in NSW, Shepparton and Ballarat in Victoria, and Murray Bridge in SA, have proved very popular with trainers for many years due to being considered much safer for the dogs.

The rebuilding of the Grafton track, also a one-bend track, is nearing completion at a cost of $4.6 million, and has been built to the latest design and safety standards possible, with wider turns, improved cambers, and safer race start positions.

In Victoria at Traralgon, the upgrade of their track will see a world first in greyhound racing design.

Yes, it is a one-turn track, but it’s a J-shape, rather than a U-shape, meaning greyhounds will have a much longer run to the first turn before entering a shorter home straight.

The track has been designed by the University of Technology Sydney, and they have come up with a world first design, after their specific brief was to reduce injuries and look after greyhound welfare.

This all goes well for greyhound racing which continues to grow in all states. 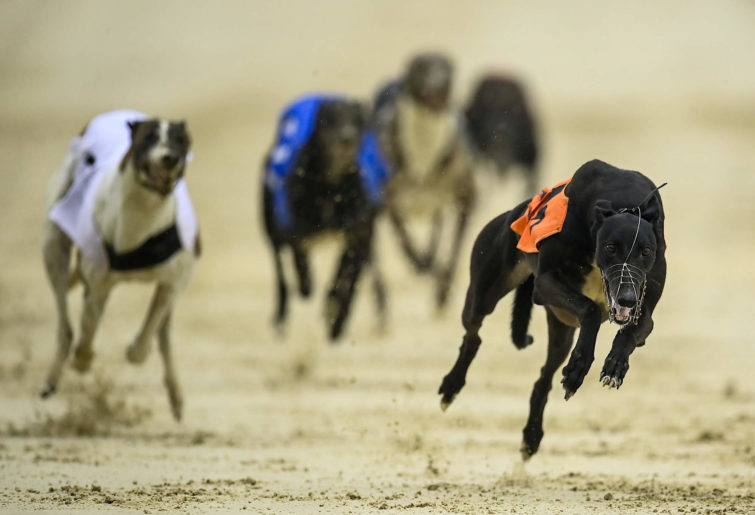 On the track over the last week, we have witnessed the finals of the Maitland Gold Cup in NSW, and the Geelong Gold Cup in Victoria.

At Maitland, it was the Michael Eberand-trained Ebby Jet Power that snatched a last stride victory from the favourite, More Sauce. It was some compensation for Eberand, who had to settle for second with Ebby Infrared last year.

It was win number 21 for Ebby Jet Power, taking his career earnings past $120,000, and providing another major race win to an offspring of the dam Ebby Miss, whose progeny have now amassed an amazing $1.4 million in prize money.

At Geelong, the Jeff Britton-trained Weblec Jet led all the way in recording a very comfortable four-length victory in a time that was only marginally outside the long standing track record.

One can expect this dog to continue to improve, given it was just his third run back from injury, and a win in a Group 1 before the end of the year would not surprise.

Heats of the Warrnambool Cup on Thursday will see many of Victoria’s sprinters engaged, seeking a place in the $50,000 to the winner final the following Wednesday night.

Greyhounds the calibre of Yoso Bale, Weblec Jet, Faithy Bale, Fernando Bluey, Shima Shine and Ferdinand Boy are expected to be among the entries for the heats.

The Mandurah (WA) Derby heats will be run on Friday, while on Saturday night at Wentworth Park heats of the Bob Payne Sprint for dogs, of the Ladies Bracelet for females, and the Gold Cup for stayers will all be run, these events holding Group Three status, with the finals the following Saturday night.

Another great week of greyhound racing.