The Roar
5th November, 2018
3
Join the conversation
5324 Reads
Advertisement
Write for The Roar

It’s Melbourne Cup time, and The Roar have assembled a panel of experts to tell you exactly what to expect for Australia’s biggest race in 2018.

Don’t forget, you can also get involved by tipping who you think the winner will be on the form below. We will have the answers here at 2:30pm (AEDT) to see what the most popular selections are.

A tough field to navigate for any punter as the Melbourne Cup always is.

It looks like many have soured a little on Yucatan after the wide barrier draw but the 5-year-old proved at the Herbert Power that he can get the job done from out wide, and this should be no different despite the lack of experience at the two-mile distance.

Watch for Muntahaa and Magic Circle to come charging from the back come the business end of the race, looking to real in Best Solution who will be hoping to lead the pack and hold off any fast-finishes on the final stretch.

Marmelo is a nice looking roughie on the hunt for redemption but it’s hard to see them bagging anything higher than a potential place at the end of the day.

I wouldn’t be surprised to see the Cummins-trained Avilius make a mark on the top four as well with some hot spring form behind him and the pressure of the stable still searching for that maiden Melbourne Cup win.

I want a stayer who runs two miles and has a turn of foot. Magic Circle ticks those boxes. Has been outstanding for Ian Williams in both runs and looks one of the hardest to beat.

If Yucatan runs a strong two miles, game over. He’ll win. Was too short in betting but is getting out to $6-$6.50, which is very backable.

Marmelo was a horse who I was red hot on last year but didn’t do much. Been set for this race and the noise out of Werribee has been positive.

Best run in the Caulfield Cup by a mile was Youngstar. She’ll eat up 3200m, back to Flemington yes and has the Winx form.

This year looks a lot more clear-cut in being able to say around a dozen horses can’t win, or at least, would be very, very (very!) surprising to see them win. Best Solution is the best of the ones I don’t want to be on, just because of being forced to carry the topweight.

So who is in the mix? Cross Counter and Rostropovich are lightweight chances for mine.

Yucatan is the rightful favourite but certainly has some questions about his ability to get 3200.

Magic Circle will appreciate the predicted rain while Muntahaa is classy but has a history of being a naughty boy in his races, fighting his jockey. Failing to calm that temperament might end his chances but I’m going to take the risk given his upside.

I have to give Youngstar a chance given she won’t carry much weight, and my roughies include Who Shot Thebarman, so watch out for the ten-year-old to run top four if there’s great pace! 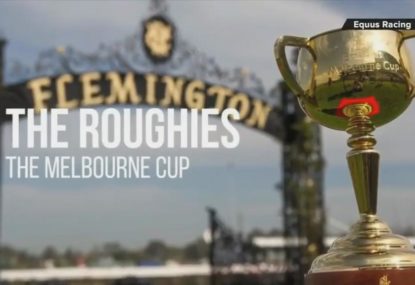 The track and its state considering rain is a big factor. Without it, Magic Circle goes from an $8 chance right out to $40. It brings Avilius more into play for mine, too. The Cup is very open to change even this late but for now, until it rains, it’s a hard track.

But there’s probably three or four that look clear-cut winning chance depending on some factors I’ve worked through above.

The more I think about it, there are only two winning chances this year if every horse in the field has even luck.

Yucatan’s Herbert Power win was the run of the carnival (perhaps only Winx’s Turnbull Stakes win was better, but you know, she’s Winx).

Magic Circle has been dominant in his last two wins, and has both the stamina and acceleration to win a Melbourne Cup. Youngstar the best of the Australian hopes, and Muntahaa the next best of the internationals coming off a strong Ebor handicap win.

Tipping winners in this years Spring Carnival, Winx aside, has been a difficult task for the expert as well as the rank amateur. Lying somewhere in between, I have had little luck. However, this Melbourne Cup will be different and I have the top four fairly well sorted. If you follow my lead, success will surely come your way.

While Magic Circle might be all the rage, it will be fellow Irish representative Muntahaa that greets the judge in first place on Tuesday afternoon. Despite a little inclement weather, the track should be firm enough for him and barrier 13 is a surmountable hurdle.

Hugh Bowman will be hot on the winners’ heels on Marmelo, allowing for the fast tempo that seems likely and Best Solution’s Caulfield Cup victory will prove relevant and telling. The Godolphin runner is of immense quality and will not be too far off the pace in the final stages.

Fourth place will go to Yucatan, whose race will be ruined and controlled by a poor barrier draw.

Two meetings to look at on Thursday, with my focus at Shepparton and Redcliffe. Down below are the best bets for the respective programs.

Two meetings to look at on Tuesday, with my focus at Tabcorp Park Menangle and Albion Park.

There are two meetings to look at on Monday, with Maryborough and Globe Derby getting my attention.